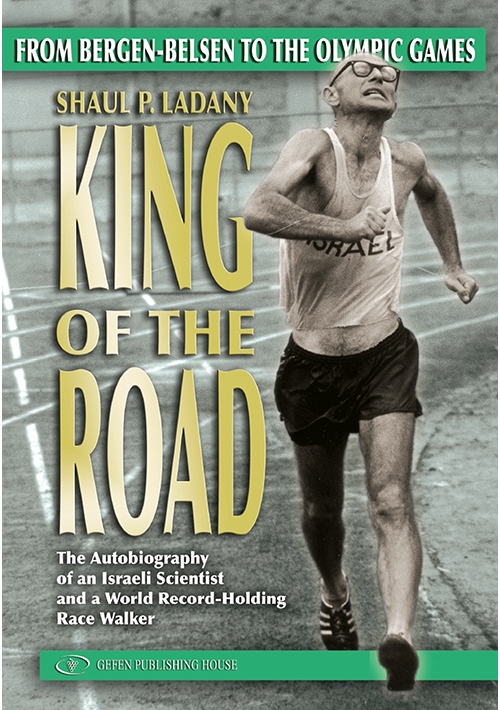 King of the Road

Price: $24.95
Special Price: $22.00
Format: Paperback
ISBN 10: 9652294217
ISBN 13: 9789652294210
Catalog Number: 421-0
Number of Pages: 384
Year Published: 2008
Description:
King of the Road is the Autobiography of an Israeli Scientist and a World Record-Holding Race Walker.
Reviews:
One senses the anguish and the excitement, the sheer nerve and determination of a man who took on the Israeli athletic establishment and did it all, his way. He manifests the courage to push beyond his own limits and the reader will experience the anguish and the exuberance of the life that Ladany has led. He earned my admiration, my respect and my gratitude. He will earn yours as well.
Michael Berenbaum
Executive Editor, Encyclopaedia Judaica

From triumph to tragedy this personal firsthand look into the past is a good reminder as we look forward into the future and where we go now.
Mark Spitz
winner of 7 gold medals swimming at the Munich Olympic Games

[Shaul Ladany] is a great survivor. He survived the Holocaust, when monks hid him from the Nazis, and he survived the Black September attack in Munich. He survived a thousand difficult competitions when only his supreme will power overcame total exhaustion
Yosef Tommy Lapid
ex-Minister of Justice of Israel

Packed with insider info on the life of a long-distance athlete and interesting anecdotes from the authors life, Shaul Ladanys King of the Road will appeal to anyone who has ever reached for a goal in life and pushed to be the best. This book will inspire you!
Tal Brody
former Captain, Maccabi Tel Aviv basketball team first sportsman to receive the Israel Prize

This is a fascinating read for anyone what has been involved in racewalking and also for anyone who has faced and fought lifes adversities and won. Shaul is a very principled, honest, and virtuous man, both in his professional and athletic lives and has steadfastly stood by those principles whatever the cost. I always admire his unbending nature in standing for what he believes is right. Well, reads the book. You will find humor along with inspiration, anger along with joy.
Ohio Racewalker

He survived the Holocaust and then escaped the Munich Massacre. Today, at the age of 72, he is an athletics phenomenon Given the extraordinary course of his life, it would be fair to call him the great survivor  the ultimate survivor even the septuagenarian professor and race walker has survived not one but two of the great global horrors of the past 100 years. As an eight year-old, back in 1944, he was interned in Bergen-Belsen concentration camp. He was one of the few of Yugoslavia's 70,000 Jews to survive the Holocaust. As a 36-year old, in 1972, he was a member of the Israeli team who were attacked by Palestinian terrorists at the Munich Olympics. He was one of six male athletes who managed to escape from the Black September group
Simon Turnbull, Independent London Newspaper