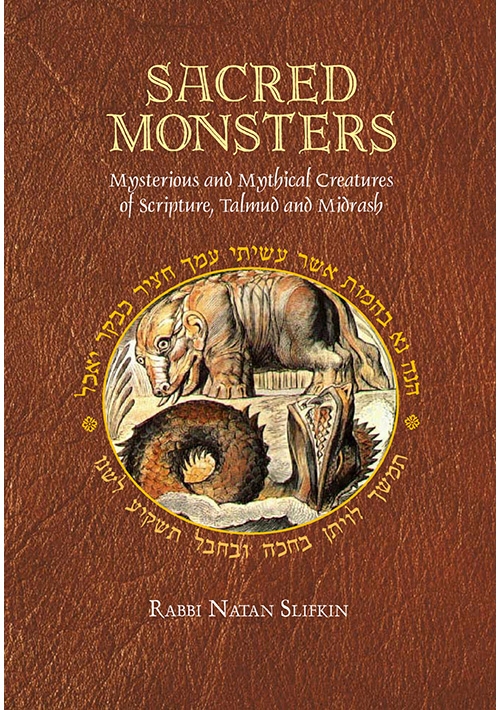 Also available on Amazon.
To order on Amazon click here.
Mysterious and Mythical Creatures of Scripture, Talmud and Midrash
Author: Natan Slifkin
Price: $29.95
Special Price: $28.00
Format: Hard Cover
ISBN 10: 9652295817
ISBN 13: 9789652295811
Catalog Number: d581 /581-1
Number of Pages: 384
Year Published: 2012
Description:
Unicorns, mermaids, dragons, and phoenixes may feel at home in fantasy literature, but references to these and other mysterious creatures go back much further in history. The Bible, Talmud, and Midrash refer to many such strange creatures. In this beautifully designed and richly illustrated book, Natan Slifkin, the famed zoo rabbi and author of Seasons of Life, Nature's Song, and The Challenge of Creation, examines a host of mythic and not so mythic creatures from both their Torah descriptions and modern zoological research, giving us a new perspective on the interface between science, myth, and Torah thought. Greatly expanding on a prior book, Mysterious Creatures, Rabbi Slifkin explores conflicts between the Talmud and science in the context of Torah mysteries of zoology. The Talmud and Midrash discuss a wide range of bizarre creatures, including mermaids, unicorns, griffins, dragons, sea-serpents and phoenixes, as well as strange biological concepts such as spontaneous generation. Sacred Monsters discusses these cases in detail and brings a range of different approaches for understanding them. It is an essential book for any student or educator who has ever struggled with conflicts between the Talmud and science. Strikingly designed, and including extraordinary photographs and illustrations, this is a truly stimulating work. The goal of this book is not merely to persuade readers that the Talmud and Midrash are worthy of their interest. It is important to discuss these creatures for the same reason that the Sages of the Talmud and Torah scholars throughout the ages saw fit to discuss them &emdash namely, that they are also part of Torah. Torah is not just about history, religious ritual and laws of interpersonal conduct. It is an extremely broad field of study that encompasses many different topics. Some areas of the Torah are more popular or more relevant than others, but we should not neglect the others. The animals of this book are discussed in classical Jewish literature for a variety of reasons. With some, such as the tachash, it is a matter of understanding the construction of the Tabernacle. With others, such as the mermaid, the goal is to clarify a matter of law. And with yet others, such as Leviathan, the point is to convey various theological messages. Furthermore, there is a particular pressing need for a book of this nature. When people encounter references to such creatures in the Talmud, they can be left with anything from gnawing questions to a severe crisis of faith. Did such creatures really exist? Did the Sages of the Talmud really believe in such creatures? What are we to make of it? This book studies the history of the various approaches that have traditionally been taken by Torah scholars in resolving such issues.

Reviews:
...A delightful mix of Talmudic teachings, zoological science, and historical investigations... Rabbi Slifkin is to be commended
for once again offering us a work which answers questions, informs, and, in this case, even entertains
Rabbi Dr. Tzvi Hirsch Weinreb
Executive Vice President Emeritus, The Orthodox Union

Rabbi Slifkin has made a career of reconciling Jewish Scripture with modern natural history... he is a young up-andcomer in the sober world of Jewish scholarship.
The New York Times

Rabbi Natan Slifkin... has emerged as a central figure in the ultra-Orthodox struggle to define the proper place of science within Judaism.
The Wall Street Journal
You may also like: