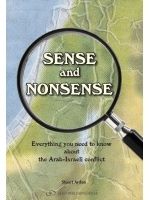 Can Israel Win the War of Words?
Sense and Nonsense

In a discussion between American President Jimmy Carter and Israeli Prime Minister Menachem Begin, Begin said that (The Hashemite Kingdom of) Jordan had been a part of the Palestine Mandate. Carter turned to his foreign policy advisor, Zbigniew Brzezinski for corroboration, and Brzezinski confirmed Begins statement. Additionally, Jordan presently has seventy-nine per cent of that mandate which stated that it was to become the Jewish homeland. Why isnt this point emphasized more?

The Golan Heights, which the Syrians claim as theirs was also a part of the Palestine Mandate, but was given away to the then-French Mandate for Syria. British Lord Carradon, the major drafter of United Nations Security Council Resolution 242, has stated more than once that no one expects Israel to go back to the 1967 border, yet Carradons name, and his statement never appear in Israeli hasbara efforts. The Fourth Geneva Convention, frequently alluded to as prohibiting Israeli settlement in areas captured in the Six Day War, has absolutely no applicability to this situation, yet nobody ever discusses that. King David purchased the Temple Mount as an everlasting possession of the Jewish people, and this is never mentioned.

The foregoing a just a few examples of the hasbara efforts that appear in this book.