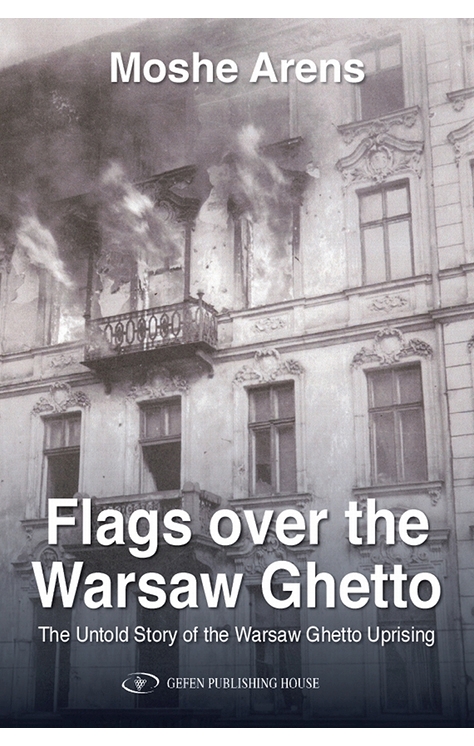 Flags Over the Warsaw Ghetto

Price: $29.95
Format: Paperback
ISBN 10: 9652295272
ISBN 13: 9789652295279
Catalog Number: g527 / 527-9
Number of Pages: 432
Year Published: 2011
Description:
The Warsaw Ghetto Uprising has become a symbol of heroism throughout the world. A short time before the uprising began, Pawel Frenkel addressed a meeting of the Jewish Military fighters: Of course we will fight with guns in our hands, and most of us will fall. But we will live on in the lives and hearts of future generations and in the pages of their history.... We will die before our time but we are not doomed. We will be alive for as long as Jewish history lives! On the eve of Passover, April 19, 1943, German forces entered the Warsaw ghetto equipped with tanks, flame throwers, and machine guns. Against them stood an army of a few hundred young Jewish men and women, armed with pistols and Molotov cocktails. Who were these Jewish fighters who dared oppose the armed might of the SS troops under the command of SS General Juergen Stroop? Who commanded them in battle? What were their goals? In this groundbreaking work, Israels former Minister of Defense, Prof. Moshe Arens, recounts a true tale of daring, courage, and sacrifice that should be accurately told  out of respect for and in homage to the fighters who rose against the German attempt to liquidate the Warsaw ghetto, and made a last-ditch fight for the honor of the Jewish people. The generally accepted account of the Warsaw Ghetto Uprising is incomplete. The truth begins with the existence of not one, but two resistance organizations in the ghetto. Two young men, Mordechai Anielewicz of the Jewish Fighting Organization (ZOB), and Pawel Frenkel of the Jewish Military Organization (ZZW), rose to lead separate resistance organizations in the ghetto, which did not unite despite the desperate battle they were facing. Included is the complete text of The Stroop Report translated into English.
Reviews:
In his new book, Professor Moshe Arens brings to light the truth about Jewish heroism and self-sacrifice in the Warsaw ghetto. His thorough research does justice to groups and individuals whose critical role and extraordinary bravery have up until now been largely left out of the historical record. Facing unimaginable odds and internecine differences, these men and women fought and fell for the honor of the Jewish people, and they deserve to be recognized. Moshe Arensgroundbreaking work is another remarkable chapter in the life of a leader who has dedicated himself to strengthening the Jewish people and the Jewish state.
Prime Minister Benjamin Netanyahu

Some of the fighters of Betar under the command of Pawel Frenkel in the Warsaw Ghetto Uprising  a symbol of Jewish resistance during the Holocaust  have not previously been given due recognition. Professor Moshe Arens  as is his way  is single-minded and does historical justice to the fearless fighters and members of the Betar movement. This book is an essential addition to the library of Holocaust heroism.
Rabbi Israel Meir Lau
Chief Rabbi of Tel Aviv-Yaffo Chairman of the Yad Vashem Council

With precision, stubbornness, and a profound belief in the righteousness of his struggle for justice in the politics of memory, [Arens] reaps the fruits of his efforts  an outstanding study
of a central chapter in the history of Holocaust heroism Professor Arens extends the scope of history.
Professor Shevah Weiss
Former Speaker of the Knesset Former Chairman of the Yad Vashem Council
You may also like: