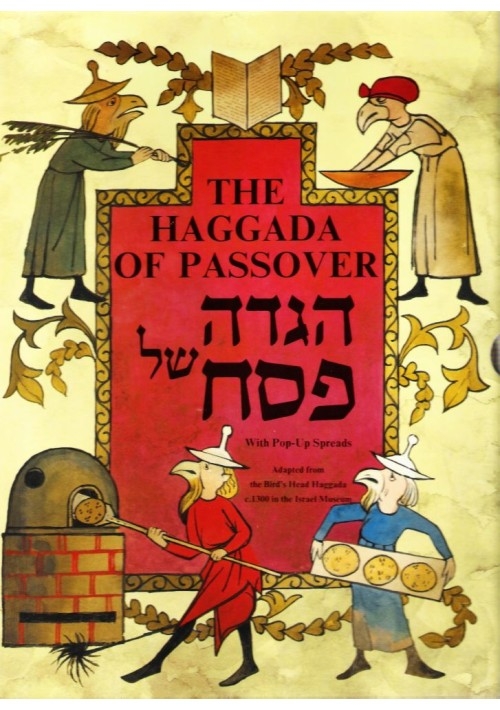 Also available on Amazon.
To order on Amazon click here.
With Pop-Up Spreads
Author: Israel Museum
Price: $48.00
Special Price: $42.00
Format: Hard Cover
ISBN 10: 9653010026
ISBN 13: 9789653010024
Catalog Number: 9789653010024
Number of Pages: 65
Description:
This Haggada is inspired by the original Bird's Head Haggada which was published in Germany and is one of the oldest Haggadot dating back to the end of the 13th century.
The Haggada is richly illustrated by movable pop-ups depicting major scenes such as The Crossing of the Red Sea, The Baking of Matzot, and The Ten Plagues etc. The original resides in the Israel Museum, Jerusalem.
The figures are drawn with birds' heads and prominent beaks. The omissions of human faces or their replacement by animal-heads are found in other Ashkenazi Jewish manuscripts of the 13th and 14th centuries. A church edict in Germany in 1215 forced all male Jews to wear pointed hats, also reproduced here. Other images bear animal heads or protuberant noses. Some appear to have been deliberately defaced, or covered with a helmet.
The Passover story is told in both Hebrew and English in this beautiful Haggada which is sure to become a family keepsake for young and old.