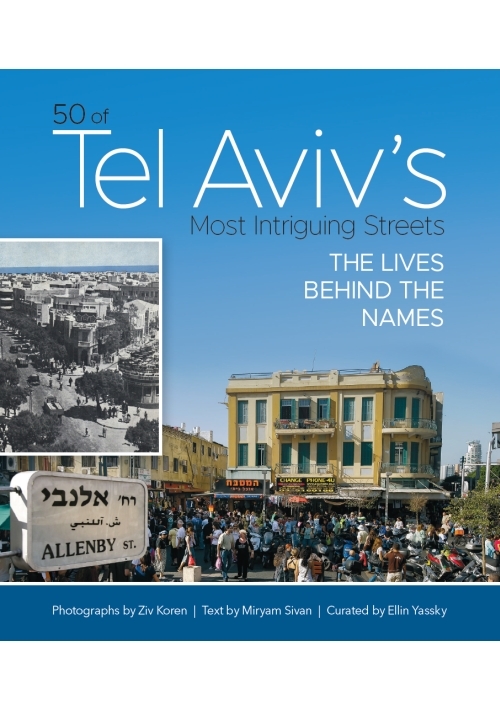 50 of Tel Aviv's Most Intriguing Streets

Also available on Amazon.
To order on Amazon click here.
The Lives Behind the Names
Authors: Ziv Koren (photography)
Miryam Sivan
Ellin Yassky (curation)
Price: $44.95
Special Price: $40.00
Format: Hard Cover
ISBN 10: 965702319X
ISBN 13: 9789657023198
Catalog Number: 7023-19
Number of Pages: 134
Year Published: 2022
Description:
Without question, Tel Aviv is one of the worlds most compact and cosmopolitan destinations. It is 20 square miles of the finest art, music, fashion, and food in the world, sitting on the magnificent Mediterranean coastline and dotted with multitudinous green parks and promenades in which to provide shade and respite from the blistering summer sun. Its the financial and start-up center of Israel and is often referred to as Silicon Wadi, a reference to it being the technology hub of Israel. It also happens to be filled with some of the worlds greatest architecture, ranging from its UNESCO-protected White City, featuring the worlds largest and best concentration of Bauhaus and International Style architecture, to masterpieces by I M Pei and Preston Scott Cohen.

Its also one of the worlds youngest cities, one that didnt organically evolve upon millennia of history it was purposefully and thoughtfully founded in 1909. A city looking toward the future. A city of modernity and culture in the midst of an ancient land and ancient peoples.

Yet, when walking the streets of this incomparable city, you are cordially invited to a history lesson provided at every street corner with questions posed by its street names. Named after Tel Avivs greatest literary and political figures, these nods at Tel Avivs and Israels history beg the question, Who was this person and what did they have to do with this citys formation? Those named after great philanthropists, statesmen, and scientists invite you to ponder the present-day results of their foresight, bravery, and vision. 50 of Tel Avivs Most Intriguing Streets: The Lives Behind the Names is posed to answer just those questions.

Including more than 300 color photographs by acclaimed Israeli photographer, Ziv Koren, and iconic, historic photographs (many of them showing then/now comparisons, expressing the lightning speed at which this city moves forward in time) celebrate the visual evolution of this City that Never Sleeps. Insightful essays by Israeli/American writer and Professor of English Literature at Haifa University, Miryam Sivan, guide you through a brief, yet concise history of the person for whom these specific streets in Tel Aviv have been deservedly named. The photos and essays have been carefully curated by Ellin Yassky, a veteran art book editor and producer, ensuring you a unique visual and literary experience as you virtually walk along these selected streets of Tel Aviv.
This is a book that invites you to pause and marvel at the amalgamation of physical and personal strength, bravery, foresight, and belief in the destiny of a modern Jewish people as they distinguish themselves as players in the world arena of arts, politics, science, and culture. It beckons you to learn about and enjoy this city on a deeper level of understanding. Through the pages of this beautifully illustrated book, walk the streets through Tel Avivs history and learn how the city unfolded from Yafo (Jaffa) to the now trendy and picturesque Neve Tzedek quarter, through the explosion of Bauhaus apartments and, wide, tree-lined boulevards, and stretching to the hi-tech campuses of state-of-the-art science and medical research, and finally the new northern residential neighborhoods that constantly push the geographic boundaries of this uncompromising, incomparable, and captivating city. This book is a visual and insightful delight.