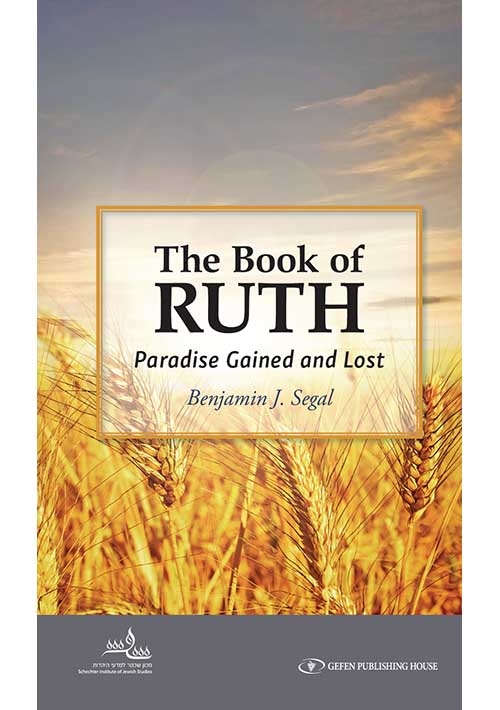 The Book of Ruth

Also available on Amazon.
To order on Amazon click here.
Paradise Gained and Lost
Author: Benjamin Segal
Price: $14.95
Format: Hard Cover
ISBN 10: B09Y2GWJYB
ISBN 13: 9789657023273
Catalog Number: 7023-27 g7327
Number of Pages: 144
Year Published: 2020
Description:
The Book of Ruth is one of the most appealing to modern biblical interpreters, touching as it does on so many subjects of current concern: the emergence of female equality, the significance of legal evolvement, the acceptance of the outsider, to name a few..
Benjamin Segal, author of earlier biblical commentaries (on the Song of Songs, Psalms, and Ecclesiastes,) here undertakes the difficult and controversial task of deciphering the original literary import of this exciting engaging book.

Following a verse- by- verse commentary, this volume offers a new overview of the Book of Ruth, framed as: a series of revolutionary changes described via a once-upon-a-time ideal:, a former time when all seemed perfect, if only for a moment. At that time and place, women assumed an equal role in societal leadership, foreigners were to be accepted
and welcomed. Historical precedents represented faults to be overcome (rather than permanent stains), the law bent yielded to humane societal concerns , kindness was rewarded, and God's will was carried out by men and women.

Rabbi Segal suggests that in each case the book text itself indicates that change did not endure. As is true in idealistic literatures of other societies, Every two steps forward brought one step back (as is the case in idealistic literatures of other societies). However, biblical tradition would never be the same, as a glimpse of the ideal moment became a permanent cultural inheritance. Historical idyll became ongoing challenge.

This commentary is an invitation to the reader to reenter the dialogue between modernity and ideals.