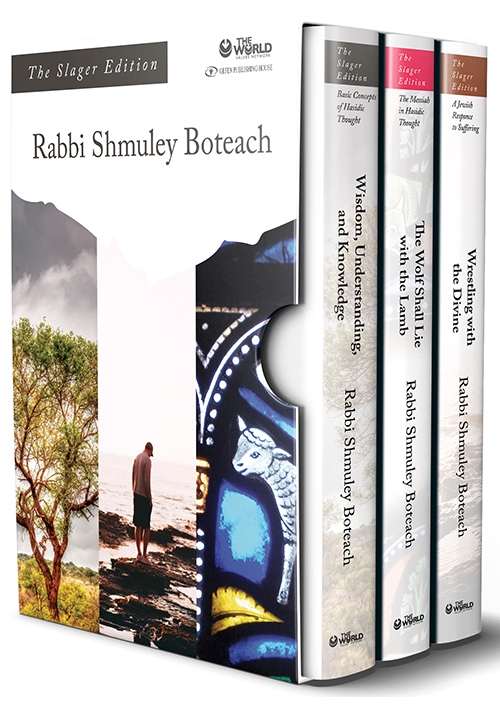 Volume 2
Wisdom, Understanding, and Knowledge
The thoughts in this book are extracts of nearly forty years of talks and commentary by the Lubavitcher Rebbe on Jewish mysticism and esoteric thought, and it is through the erudition and fluency of Rabbi Yoel Kahn that they have been anthologized into a series of essays in which each idea naturally flows from the ideas preceding it. Because of their profundity, the ideas presented in this book have remained largely inaccessible to the uninitiated scholars of hasidic thought. Shmuley Boteach has adapted these ideas to make them accessible to a contemporary audience that may have little knowledge of Jewish mysticism. Wrestling with the Divine How can one maintain unwavering faith in a benevolent God in light of events such as the Holocaust and the ever-present threat of incurable disease? Judaism sees death, illness, and suffering as aberrations in creation that were brought about through the sin of Adam in Eden.

Volume 3
Wrestling with the Divine
In this book Boteach claims that mans mission was never to make peace with suffering and death, but to abolish them from the face of the earth by joining God as a junior partner in creation. By using such physical tools as studying medicine, giving charity, and being there in times of need, and by using such spiritual means as protesting to God against injustice and demanding that He correct the flaws of the world, we help usher in an era when only goodness will prevail over the earth.


Rabbi Shmuley Boteach, whom the Washington Post and Newsweek call the most famous rabbi in America, stands among the world's most recognizable and passionate voices on values, spirituality, and relationships. He is the international bestselling author of over thirty books, including Kosher Sex, and his columns, TV, and radio appearances are regular staples in media all over the world. He is the founder of The World Values Network, promoting universal values in American culture and media. The winner of the London Preacher of the Year competition, the national Fatherhood Award, and with thirty years of experience in relationship counseling, America's rabbi lives in New Jersey with his wife and nine children.

Rabbi Shmuley wrote Wisdom, Understanding, and Knowledge, The Wolf Shall Lie with the Lamb, and Wrestling with the Divine while serving as the rabbi and director of the Chabad House of Oxford University and the Oxford LChaim Society from 1988 to 1999. The 2018 reprint includes the same text as the original publications.
You may also like: