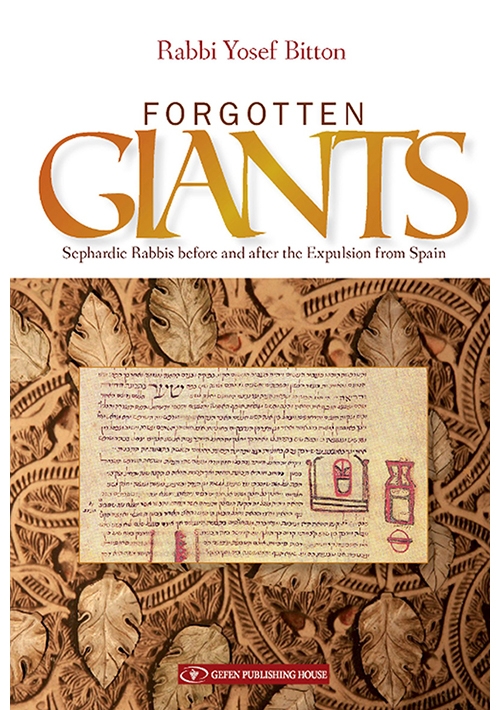 Also available on Amazon.
To order on Amazon click here.
Sephardic Rabbis before and after the Expulsion from Spain
Author: Yosef Bitton
Publisher: Gefen Publishing House

Price: $18.00
Format: Paperback
ISBN 10: 9652298743
ISBN 13: 9789652298744
Catalog Number: g874 / 874-4
Year Published: 2016
Description:
The expulsion from Spain in 1492 is the central event of Spanish Jewish history. Forgotten Giants explores the lives, works, and ideas of twenty-six Sephardic Rabbis in the fifteenth, sixteenth, and seventeenth centuries, in the time period straddling this upheaval. generations of rabbis are included: those who were born and lived in Spain, those who were born in Spain but left at a young age, and those who were sons of Spanish refugees. Through the narratives of these twenty-six prominent rabbis lives, we learn about the world of the Jews in Spain before the 1492 expulsion, the struggles of the rabbinical leadership against the missionary efforts of the Church to convert the Jews, and the theological debates that took place, especially during the beginning of the fifteenth century. The expulsion of the Jews from Spain is covered, together with the exile to Portugal, the expulsion from Portugal, and the birth of the new Sephardic Diaspora in Mediterranean countries. Within that Diaspora, the book pays special attention to the establishment of the Spanish refugees in the Land of Israel, in the city of Safed and later on in Jerusalem. This fascinating series of tableaux of the lives of great Sephardic rabbis paints a vivid picture of Jewish life and thought in Spain before the 1492 expulsion, during the tumultuous years of exile, and after the reestablishment of the Sephardic communities in the Diaspora. In-depth portraits of the lives and works of twenty-six great Sephardic rabbis. Covers three generations of rabbis from the late 1400's to the early 1600s. Paints a vivid picture of the years before, during, and after the Expulsion of the Jews from Spain and Portugal. Revives the legacies of forgotten Sephardic giants. Details the persecution suffered by the Jews of this era at the hands of their governments and the Church. Reveals the beginnings of Sephardic settlement in the Land of Israel.