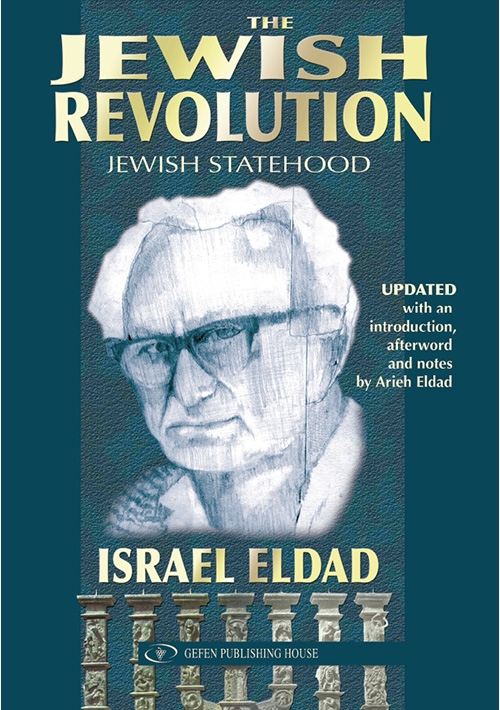 Price: $21.95
Format: Hard Cover
ISBN 10: 9652294144
ISBN 13: 9789652294142
Catalog Number: 414-2
Number of Pages: 168
Year Published: 2007
Description:
With The Jewish Revolution classical Zionism has found its true interpretation. In the highest tradition of the soldier-statesman, Dr. Israel Eldad advocates a form of Zionism that is unpopular in conventional society. He condemns
establishmentarian, social-club Zionism as a belittling of Jewish history and a threat to Jewish lives. In its
place, he calls for a revolutionary creed  one that dares assert its right to the Jewish homeland; not as defined by diplomats, politicians and Security Council Resolutions, but in biblical, historical terms.

He boldly declares that Jewish diplomacy failed to save millions of European Jews, and he accuses world leaders of
inviting new Holocausts by denying historys lessons and ignoring its imperatives. He warns the Jewish people that it can rely only on its own forces, and he offers a solution to the Arab problem in the Middle East.

The Jewish Revolution combines the passion of the patriot, the logic of the scholar and the sweep of the historian.
Reviews:
Table of Contents
Introduction
An Existence of Nonconformity
The Fall of the Bastille
Sources of Zionism  Two Old and One New
New Zionism vs. the New Left, or the Joseph Complex
Zionism as Liberation, Revolution and Renaissance
Right, Necessary and Possible
The Zionist Front in Soviet Russia
Intermezzo, Rhapsody, Caesura
Eretz Yisrael or Palestine
The Arab-Jewish Conflict
Before Any Court of Justice
Jordan Is a River Not a State
Israel and Ishmael
Three Points of No Return and Three Stages of Salvation
Israel
Afterword by Arieh Eldad
You may also like: