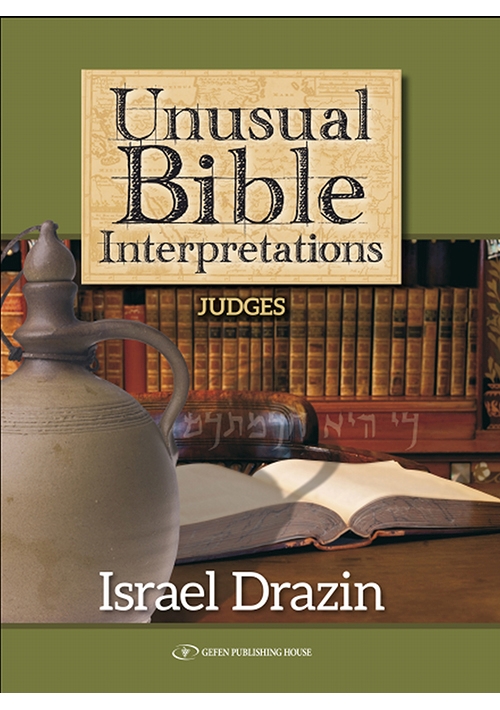 Also available on Amazon.
To order on Amazon click here.
Author: Israel Drazin
Price: $24.95
Special Price: $20.00
ISBN 10: 9652297100
ISBN 13: 9789652297105
Catalog Number: 9789652297105
Number of Pages: 201
Year Published: 2015
Description:
This book offers readers surprising eye-opening facts about the biblical book Judges based on the writings of ancient and modern sages, as well as original interpretations by the biblical scholar Dr. Israel Drazin. Most people suppose that the book of Judges is filled with tales of pious leaders called judges who performed acts that protected the Israelites and helped form them into a praiseworthy nation. A close reading of the book shows that the early history of Israel was just the opposite.

The book reveals that after Joshuas death the Israelites repeatedly worshipped idols; God was angered each time they did so and dispatched pagan nations to harass and kill them. It was only after the people wept and repented that God sent someone to deliver them. The Israelites apparently acted properly as long as these saviors, called judges, lived, but as soon as they died, the Israelites lapsed and worshipped idols again.

While the tribes were united under Moses and Joshua, during the period of the judges each tribe lived alone and usually acted alone, rarely joining other tribes to aid them against pagan invaders.

This was a time when there was no king in Israel; everyone did what he felt was proper in his own eyes. As a result there were three civil wars: against Ephraim, Benjamin, and Jabesh-gilead. There were episodes of theft, as when Micah stole money from his mother and money promised to a sanctuary, and when the tribe of Dan took Micahs property, kidnapped his priest, destroyed a peaceful city so they could occupy it, and ironically established a holy sanctuary there. Rapes occurred, such as the rape of the Levites concubine and the rape of 600 women that the Israelites gave to the surviving Benjamites males who had escaped the civil war they waged against them.

While the English translation of the Hebrew shophtim is judges scholars understand the term to denote a governmental and leadership function, not just judicial. Some scholars call these shophtim charismatic leaders.

We have no idea how many judges existed. Fourteen or fifteen judges, who came from many different walks of life, including one woman Deborah, are mentioned in Judges. Two of them, Eli and Samuel, are not mentioned in Judges but in I Samuel. Some of the judges have extended descriptions of their exploits, but little information is given about five judges.

The position of judges never became a fixed part of Israelite society presumably because it was not an effective form of government.

The book seems to extol the tribe of Judah and belittle the tribes of Ephraim and Benjamin. This led some scholars to believe that Judges was composed in the southern kingdom of Judea after the defeat of the northern kingdom of Israel in 722 BCE to humiliate Israel which had seceded from the Judean nation of King Davids successor around 922 BCE. Contrary to what many think, there are many obscure passages in Judges, leaving to readers the task to decide how they want to interpret events. There are also many errors in the text, some of them noted on the pages by the Masorites.