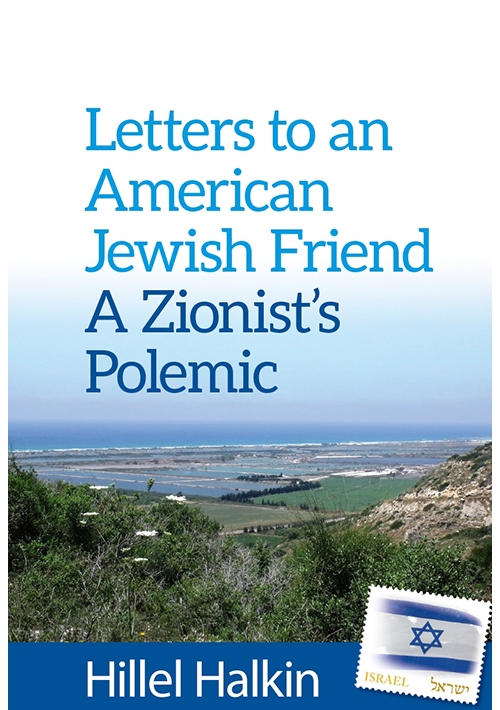 Letters to an American Jewish Friend A Zionists Polemic

Price: $19.95
Special Price: $18.00
Format: Paperback
ISBN 10: 9652296309
ISBN 13: 9789652296306
Catalog Number: 9789652296306
Number of Pages: 293
Year Published: 2013
Description:
Hillel Halkin is an American-born Jew who has cast his personal and historical lot with Israel. The imaginary American Jewish friend to whom Halkin directs his onrush of argument is an equally committed young Jew who, however, upholds the possibility of a viable Jewish life outside of Israel. He has just returned to the United states after his second visit to Israel and written a letter of his impressions, which triggers the present correspondence. The two friends argue about Zionism, Israel, Jewish history and culture,
the nature of Jewishness. As the gauntlet is flung back and forth, Halkin elaborates his case that Jewish history and Israeli history are two lines in the process of converging, so that for all practical purposes the struggle for Jewish survival and the struggle for Israel are the same; and that any Jew who chooses, in the absence of
extenuating circumstances, not to live in Israel is removing himself to the peripheries of the struggle for Jewish survival and away from the center of Jewish history. Either/orsooner or later, today or tomorrow, you will have to decide, Halkin concludes.
Reviews:
Hillel Halkin is a great contemporary Zionist thinker. A year ago, I
reread his Letters to an American Jewish Friend, which decades later stands as one of the smartest, sharpest explorations of the delicate relationship
between the committed Diaspora Jew and the Aliyah-making Zionist. As I read the book, one page after another was loosened from the binding, and I
thought, Boy we need a new edition of this book. I am thrilled to welcome this classic  with a compelling, inspiring new introduction by the author. The issues are remarkably relevant, the writing remains fluid, the passion infectious, the insights profound. New generations of readers will be inspired by this, and older generations of readers will eagerly greet this new edition like an old  and long yearned-for  friend.
Gil Troy, author, Moynihans Moment: Americas Fight against Zionism as Racism and Why I Am A Zionist

Three and a half decades ago, the appearance of Hillel Halkins Letters to an American Jewish Friend sent shockwaves through the American Jewish community. The book was what would become known as vintage Halkin  smart, thoughtful, provocative, unsettling. No one who read it put it down untouched or unmoved. That Letters is being reissued now, making it available to a generation that needs it perhaps even more than the generation in which it first appeared, is cause for celebration, hope and gratitude.
Daniel Gordis, Shalem College, Jerusalem; winner of the National Jewish Book Award for Saving Israel

A book any Jew concerned with Israel and the future of the Jewish people ought to read.a clear, forceful polemic that will drive every reader back to a careful scrutiny of his own preconceptions about Jewish existence.
Robert Alter
Commentary, August 1977

A polemic, blazing with passion and inventiveness and good humor, a cri de coeur impelled by a fury of conviction.
Amos Elon
The New York Times, August 1977

American Jews will be disturbed by Halkin's articulate 'letters' from Israel His arguments are succinct, intriguing, and deserve the serious attention they have already commanded.
Bernard Avishai
The New York Review of Books, November 1977

With humor, metaphor and passion, Halkin compels a moral confrontation with the alternatives before the Jewish people  ease in a fading Diaspora or unease in Zion.
Marie Syrkin
The New Republic

If there has been a more significant Jewish book published in this decade, I haven't seen it.
William Novak
Midstream
You may also like: