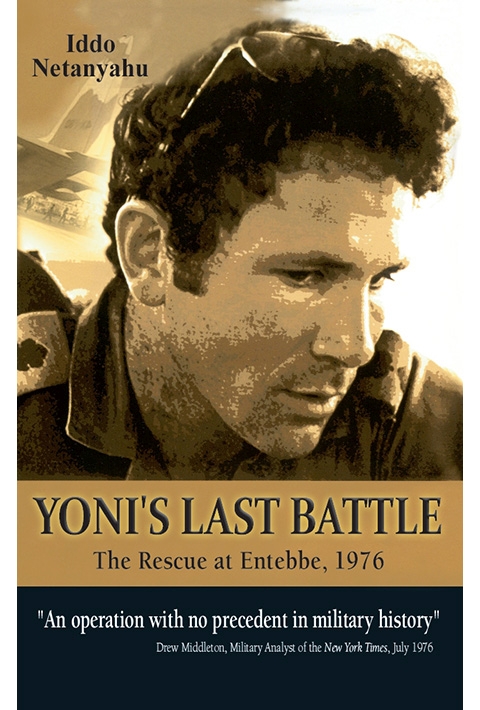 While the nation of Israel, and Jews throughout the world, struggle with the painful realities of the current Intifada, Yoni's Last Battle by Iddo Netanyahu returns to an earlier chapter of the Arab-Israeli struggle  to a time when the battles were more clear-cut, and genuine heroes led the charge.

The date was 4th July 1976. While millions of Americans celebrated the 200th anniversary of their independence, thirty of Israel's elite commandos flew 2,000 miles to Entebbe, Uganda, under the cover of darkness, in a desperate attempt to rescue 105 Jewish and Israeli passengers hijacked by terrorists on an Air France flight. Lt. Col. Yonatan Netanyahu, a courageous and celebrated soldier, led the daring operation. Virtually the entire group of hostages was liberated and returned safely to Israel, but Yoni was killed in the operation that was described by the New York Times as having no precedent in military history.

Yonis Last Battle: The Rescue at Entebbe, 1976 is a gripping account of the operation. In extraordinary detail, Dr. Iddo Netanyahu Yonis youngest brother, and also brother to former Israeli Prime Minister Binyamin (Bibi) Netanyahu  reconstructs events to portray a minute-to-minute chronicle of one of the earliest and most spectacular victories in the modern war against terrorism.

Based on interviews with almost every member of the operation, Yoni's Last Battle is a fascinating and first-hand account of the intense 48-hour period of planning and preparation of the mission, and its near-perfect execution in extremely difficult circumstances. Yonis Last Battle is also an intriguing portrayal of Yoni himself, who at the age of 30, was the brilliant and heroic commander of a courageous and daring mission.
Reviews:

Dr Iddo Netanyahu has a unique perspective on terrorism.'

Netanyahu has written an exciting tribute not just to his late brother, but to the courage of a nation.

This book is timely. When the world has to resist terrorism as never before, we can draw inspiration from Yoni and his missionThe world could do with another Yoni.'