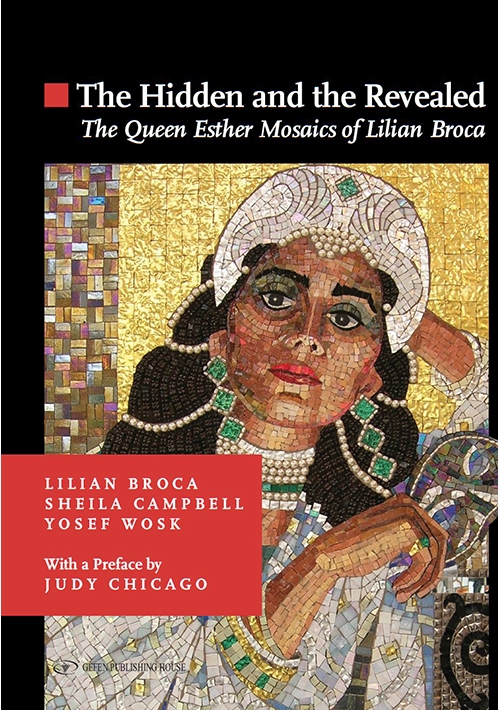 Also available on Amazon.
To order on Amazon click here.
The Queen Esther Mosaics of Lilian Broca
Authors: Lilian Broca
Sheila Campbell
Judy Chicago
Yosef Wosk
Price: $35.00
Special Price: $28.00
Format: Hard Cover
ISBN 10: 9652295604
ISBN 13: 9789652295606
Catalog Number: 560-6
Number of Pages: 190
Description:
A stunning art book, but far more. In addition to glittering reproductions, details and working drawings of the ten mammoth pieces in this award-winning series about Esther of the Bible, the book features the artist's own story, illuminating her journey from war-torn Romania to Israel to Canada, what drew her to Esther and mosaics as a medium, and how she employed ancient techniques with a contemporary sensibility. An art historian provides a chapter comparing Broca's interpretation of Esther to that of such past artists as Rembrandt and Artemisia Gentileschi. The book finishes with a provocative, lyrical prose-poem written in the imagined voice of Esther by a prominent rabbi and scholar. An appendix provides the full text of Esther in beautiful calligraphed Hebrew with an accompanying English translation.

Seven years in the making, The Queen Esther Mosaics by Lilian Broca contribute to the vital historic task of what the biblical scholar Naomi Graetz called for in S/He Created Them: Feminist Retellings of Biblical Tales:to put woman's voice back where it should have been in the first place.

From the Preface
Byy internationally acclaimed artist and author Judy Chicago. Lavishly illustrated, The Hidden and the Revealed brings print as close as possible to capturing the shimmering brilliance of artist Lilian Broca's monumental Queen Esther Mosaic Series. In favorably comparing Brocas depictions of Esther to those of Rembrandt, Artemisia Gentileschi, Gustave Doré, and other artists of the past, art historian Sheila Campbell writes that mosaic is 'a dynamic medium, the image constantly and subtly changing[that] works together with the content and style of presentation to make the queen a provocative, three-dimensional character.'

Created in classical Byzantine style but with contemporary sensibility, Brocas mosaics literally give light  and life  to the complex personality of Esther: the Jewish queen of Persia who, through sheer courage and genius, rose from shy obscurity to become her peoples savior.

Inspired by Broca's mosaics to create a vividly lyrical prose-poem in the queens own, now elder-sage voice, rabbi and scholar Yosef Wosk manifests the heart of a multifaceted character: And I am Estr the hidden moon-one, she who swaddles the eclipsed light until its chosen nativity; who hides from king and court, from haremed friend and plotting foe. I am she who must conceal so that others never have to, who hides to avoid confrontation, who hides in the image of God, who hides in hiding

In Brocas compelling mosaics, what is hidden is now revealed: vibrantly alive, glowing with a rich intensity, radiating meaning and relevance for the viewer of today.
Reviews:
This is a unique exploration of The Esther Mosaics by Lilian Broca. It is divided into three sections. The first is written by the author and charts her journey in making these pieces of art.

The reader learns about the techniques used in creating the mosaics as well as the emotional equity that went into them. There is also some background information on the artist. The second part, written by Sheila Campbell, is a historical piece that places Brocas work into context of other works about Esther. The third is a more literary approach by Yosef Wosk and includes pieces of poems, essays, and narrative conversations. These are quite powerful coming just after the exploration of Brocas work. The mosaics themselves are stunning, the commitment to place the characters in the correct historical context is wonderful, and the colors are reathtaking.

There is also a grand scope to these pieces that feels quite regal. A beautiful Hebrew-English version of the book of Esther (the Megillah) is provided in the back, and there are notes at the end of each section. The book would have been even more effective if images of the mosaics had been isolated in the front of the book. This book would be appropriate for synagogue libraries; it is recommended for Jewish libraries.
Debbie Feder
Director, Library Resource Center, Ida Crown Jewish Academy, Chicago, IL


For centuries, the most serious art in Italy was laboriously crafted in mosaics. It was taken for granted that the Bibles timeless stories deserved the timelessness of polished stones. Its an old idea, but Lilian Broca sees the point. She makes contemporary art with the merits of ancient art.
John T. Spike
author, art historian, art critic, and past
director of the Florence Biennale International Exhibitions
You may also like: