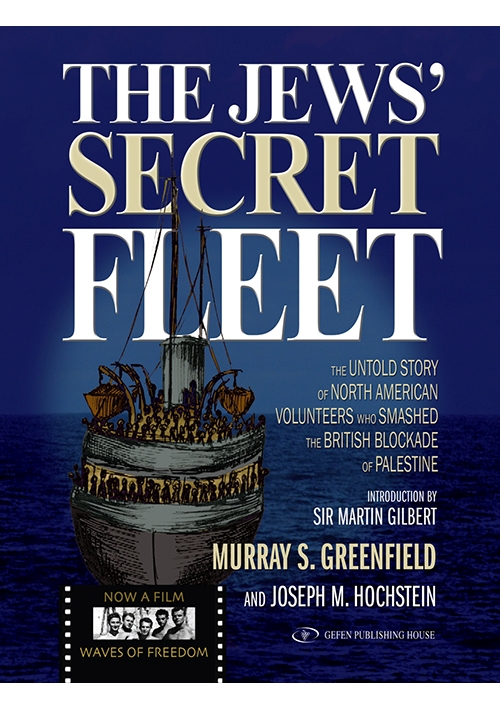 A renowned book that is now the basis for a new documentary film by Alan Rosenthal entitled Waves of Freedom. The film is being shown in film festivals throughout the US and Israel.

The Jews Secret Fleet, is the only authentic book that covers the full participation of 240 volunteers from North America. These men sailed from the USA to Eretz Israel on 10 ships, bringing some 35,000 survivors of the Holocaust. The book details their remarkable journey.

The book documents in words and pictures the story so dramatically told in Leon Uris', The Exodus. It tells the real story of the actual people some of whom were represented by Uris' fictionalized characters. The individuals and the personal stories that inspired the characters Ari Ben Canaan played by Paul Newman in the movie, Katherine Kitty Fremont, Bruce Sutherland, Karen Hansen Clement, Dov Landau and others are documented in this book.

Listen to a Sailor's Story, a July 16, 2007 Nextbook.com interview with unlikely Exodus crew-member Jack Johnson from Alaska, who recalls his part in this great episode of modern Jewish history.

Reviews:
This is a no-holds barred reality check on how the Brits with Arab oil on their mind did all they could to keep Jewish Birth-right peoples from entering Palestine - the Jewish homeland.... Bob and Barbara Epstein, Outdoor Florida

The Jews Secret Fleet is full of stories as dramatic as that of the Exodus. It reminds us that American Jews played a small, yet significant role in the creation of the Jewish state. Four of the American vessels became the first warships in the fledgling Israeli navy. The bravery displayed by these American volunteers for Aion should not be forgotten, and this book helps make certain they will receive their historical due.
Henry Srebrnik, Washington Jewish Week


I am pleased to know that a book covering your remarkable experiences will be published in the near future and preserve for all time one of the most glorious chapters in Jewish history. What miracles you accomplished against such overpowering odds, in the face of such dangers, is a story that has few parallels and will be an inspiration to our people forever.
Leon Uris, Author of The Exodusr


Dramatic, moving and engrossing, this is the story of some 200 young American seamen who sailed the so-called illegal ships and carried half of the 70,000 survivors of the Holocaust to the land of Israel.
With careful documentation and often poignant and amusing anecdotes, Joseph Hochstein and Murray Greenfield have recorded the historic role that American volunteers played in the birth of Israel - an inspiring and exciting part of history that must never be forgotten.
Ruth Gruber Author of Raquela: A Woman of Israel and Rescue: The Exodus of Ethiopian Jews
You may also like: