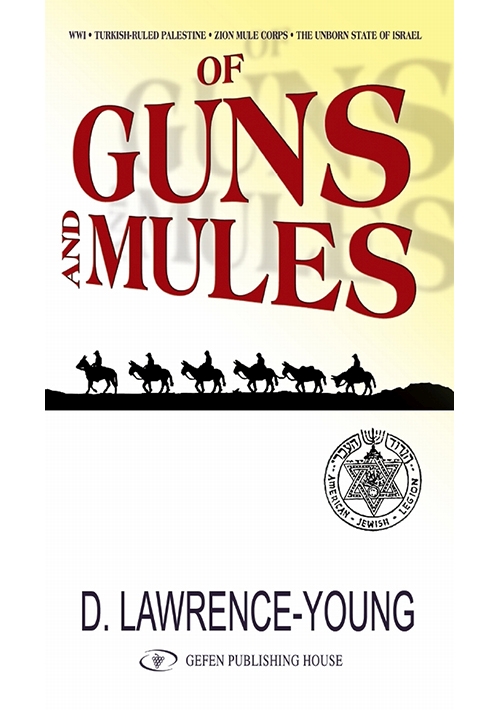 Also available on Amazon.
To order on Amazon click here.
Author: David Lawrence -Young
Price: $12.95
Special Price: $12.05
Format: Paperback
ISBN 10: 9652294578
ISBN 13: 9789652294579
Catalog Number: 9789652294579
Number of Pages: 160
Year Published: 2009
Description:
When eighteen-year-old David Levi is arrested together with his father and friends and deported from their home in Palestine by the Turks, none of them knows what the future holds. But their spirits soar when they are offered the chance to enlist with the newly formed Zion Mule Corps, a service unit of Jewish soldiers commanded by the legendary ex-Russian war hero Joseph Trumpeldor. Their orders: to help the British army in its WWI Gallipoli offensive. David and his friends grow to manhood in the trenches, fighting first in the Zion Mule Corps and later with Zev Jabotinsky s dream unit, the Jewish Legion. Fighting from the Jerusalem Hills to Es-Salt, and from Es-Salt to Um Es-Shert near the Dead Sea, the Jewish Legion makes a significant contribution to General Allenby s successful drive to expel the Turks from Palestine. This eminently readable historical novel takes us on a journey to the dawning of the modern State of Israel, leading up to the days of the British Mandate for Palestine. Narrated with humor, gripping battle scenes, and a touching love story, Of Guns and Mules makes the history of pre-state Israel come alive.

1914: The Ottoman Turks rule the Holy Land; the French and British are determined to wrest control from the Empire. Enter the Zion Mule Corps  the first organized Jewish army unit since the Maccabees.

They fought the Turks at Gallipoli under the command of Irishman Lieutenant Colonel John Henry Patterson, but when ordered to help put down anti-British riots in Ireland, they refusedsome may have called them 'terrorists' but these soldiers didn't target civilians.

The great contributions made by these soldiers have been lost to time. They are no longer with us to tell their stories, the subject is not taught in schools and much of the historical record is not in English, said author, teacher and historian David Young.

Many of Israel's military and civilian leaders first cut their teeth as soldiers in the Zion Mule Corps and the Legion. Among them, David Ben-Gurion, Israel's first Prime Minister, as well as Nehemia Rabin, the father of Yitzhak Rabin, the Israeli Prime Minister assassinated in 1995, he continued.

In his fourth historical novel, the first to be published by Gefen Publishing House of Jerusalem, Young tries to make younger generations aware of this important period in Israeli history.

An 18 year-old boy in love, fighting for his country from Gallipoli to the Jordanian side of the Dead Sea to British-ruled Palestine is a character I feel people can really connect with, young and old alike.

Dissolved by the War Office for not fighting the Irish, the Zion Mule Corps was reestablished as the Jewish Legion out of a desperate need by the British for fresh troops. Now a part of General Allenby's forces, their goal was to drive the Turks out of the Holy Land, but at the end of the war they found themselves as part of a police force in the new British-ruled Mandate of Palestine  fighting against their own people. This story was repeated in WWII when a much larger unit of Jewish soldiers, known as the Jewish Brigade, fought against the Nazis in Europe  a unit responsible for bringing many concentration camp survivors and other Jewish refugees to British Mandatory Palestine.

A Time to Kill, A Time to Heal Price:$18
More Info