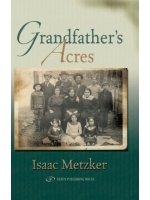 An Orthodox Jewish family of farmers struggles with the hardships of daily life, tension with their alien neighbors and the changing moods of nationalism and enlightenment that are sweeping through the countryside. Moments of sorrow and those of happiness punctuate the lives of these determined and devoted Jewish farmers, against a backdrop of sometimes frightening political change. The lives and the way of life, portrayed in this novel are told with a deep admiration and love, which serves as a literary testimony to a reality that, 50 years later, went up in flames.

Isaac Metzker (1900-1984) emigrated from those very surroundings presented in his novel, to the USA in 1924. He was a teacher in the Workers Circle and a writer, editor and journalist at the Jewish Daily Forward. He worked tirelessly to spread the Yiddish culture in his new homeland. He was the author of a number of books for young adult readers, historical novels and stories. He was also the editor of two popular volumes titled, A Bintel Brief.

Reviews:
Aside from the personal angle (Isaac Metzker was my third cousin, and he is writing about a village in which my father lived for five years during the First World War), this is a wonderful book for anyone who has wondered what daily village life was like for the Jews of Eastern Galicia in the 19th century. Almost every page has one or more details that I've never seen anywhere else, from the type of lighting used, to the nature of the floors, from superstistions surrounding pregnancy and child birth to the everyday relations between Jews and Christians in the villageand on and on. It's a gem, and the writing is great, too.