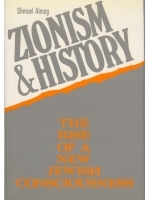 Price: $57.70
US release Date:
US orders placed before US release date ship from israel.
For US shipping, place your order after the US release date.
Format: Hard Cover
ISBN 10: 0312898851
Number of Pages: 332
Year Published: 1987
Description:
The radical transformation of the Jews during the last century has not ceased to arouse curiosity. Once a widely scattered, mostly isolated and rather backward, and often despised minority-group, Jews have risen in the world. Today they are an advanced and outgoing sector of western society, which having established themselves as a sovereign nation in their ancient homeland.
What is the difference between Jewry and Judaism? Are Jews an ethnic minority, a religious community, a political entity? This book faces such issues by depicting their historical background and analyzing their intellectual underpinnings. Thus Zionism at the turn of the century is presented as a thorough-going renaissance movement that changed Jewish life from within, and transformed the relations between the Jews and the outside world.
You may also like: