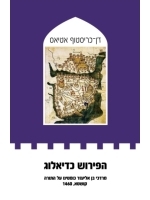 Price: $29.70
Format: Paperback
ISBN 10: 9654932997
Number of Pages: 176
Year Published: 2007
Description:
Fifteenth-century Constantinople Jewry witnessed the collapse of Byzantine power and the Ottoman conquest of the city in 1453, the last flowerings of Jewish Byzantine culture before 1492, the expulsion of the Jews of Spain and their massive immigration in the Ottoman Empire, as well as a turning point in the history of Rabbanite-Karaite relations marked by efforts toward reconciliation. The study of the literary and pedagogical activity of a Jewish Rabbanite scholar like Mordekhai Komtino (1402-1482) is probably the best way to analyze the impact and meaning of such developments.
Even though Komtino had no formally defined communal responsibilities, he was an important intellectual leader of his community, and was recognized as such even beyond its boarders. His work, like the work of other medieval Jewish authors, is composed almost entirely of commentaries - whether the commented text was canonical, as with the Pentateuch, or whether it was a profane scientific or philosophical text, such as the writings of an Abraham Ibn Ezra or a Moses ben Maimon. As such, his work is primarily a re-writing or a re-elaboration of a pre-existing literary heritage. Komtinos « debts » are many. His texts are filled with citations, borrowings, and allusions, especially in reference to the Sephardi exegetic and philosophical tradition. His writing is nevertheless the product of a particular time and place, it is indebted as much to the history, conflicts, and personal experiences of its author as it is to his « sources ». It is the product of a given situation, written in answer to given questions in the framework of a historically defined set of tensions.
After a survey of Komtinos career, a presentation of his writings, and of the historical context of his activity, this book focuses on a methodical analysis of one of his major works: his commentary of the Pentateuch - never printed as most of Komtinos writings, available only in manuscripts (for the most part in the French National Library in Paris). It reveals the two main challenges Komtino had to take up: his confrontation with his Karaite disciples and readers and with the Karaite exegetical tradition on the one hand, and his confrontation, as an epigone, with a major and dominant figure of the Sephardi exegetical tradition, Abraham Ibn Ezra. But this book is not only a monograph, a case study. It is also a reflection, using the concepts and methods of contemporary literary critic, on what commenting (Torah) means, on writing as rewriting, and on exegesis as a dialogue: with a text, with a context, with illustrious predecessors as well as contemporary public, disciples, colleagues and competitors.
You may also like: