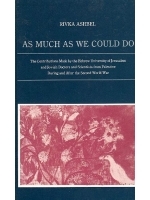 As Much as We Could Do

Price: $29.10
US release Date:
US orders placed before US release date ship from israel.
For US shipping, place your order after the US release date.
Format: Hard Cover
ISBN 10: 9652237302
Catalog Number: 9652237302
Number of Pages: 304
Year Published: 1989
Description:
Some 10,000,000 people perished from tropical diseases during World War I. Since that time these diseases, among them typhoid fever, malaria, and dysentery, have all been subjects in intensive research at the Hebrew University.
Follow the bitter experience of World War I, and with the aid of the immense wealth of knowledge that had since been accumulated, the Allies joined forces during World War II and produced drugs to combat these scourges. The Hebrew University played an impressive role in this, placing both its scientists and its laboratories at the disposal of the war effort. Great quantities of vaccines were prepared in the Universitys laboratories, enabling the inoculation of tens of thousands of soldiers; physicians in the Allied forces took courses on tropical diseases at the University; some University scientists were mobilized and served at the front in special medical units, while others developed new equipment and rendered obsolete medical instruments reusable.