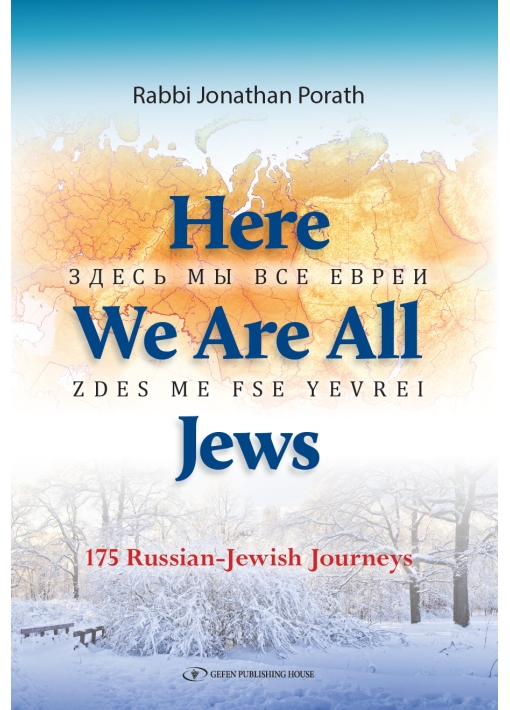 Here We Are All Jews

Also available on Amazon.
To order on Amazon click here.
175 Russian - Jewish Journeys
Author: Jonathan Porath
Price: $24.95
Special Price: $22.00
Format: Hard Cover
ISBN 10: 9657023920
ISBN 13: 9789657023921
Catalog Number: 7023-92
Number of Pages: 272
Year Published: 2022
Description:
Rabbi Jonathan Porath recounts the story of his lifetime of experiences with Soviet and post-Soviet Jews spanning over fifty years. This first-person account is packed with anecdotes from one of the great sagas of modern Jewish history, the near loss and ultimate return of Soviet Jewry to the Jewish people after more than seventy years of Communist rule.

The important message of the book is that regardless of the degree of antisemitism, attempts to eradicate the Jewish people and the time from of isolation from the rest of the Jewish world there is always a remaining spark that rekindles revival. It happened after the Holocaust. It happened after centuries of Jewish exile from the ancestral homeland, and it happened with Soviet Jewry, just as it did throughout Jewish history.
Greer Fay Cashman
Jerusalem Post, 4 November 2022


A moving message of Jewish connection and an important perspective on a chapter in Jewish history worthy of being told.
Natan Sharansky
former Prisoner of Zion

Filled with unforgettable vignettes, the volume serves both as a primary historical source on the Soviet Jewry movement and as a monument to a proud Brandeis alumnus who helped transform the Jewish world.
Jonathan D. Sarna
University Professor and Joseph H. & Belle R. Braun Professor of American Jewish History, Brandeis University
You may also like: