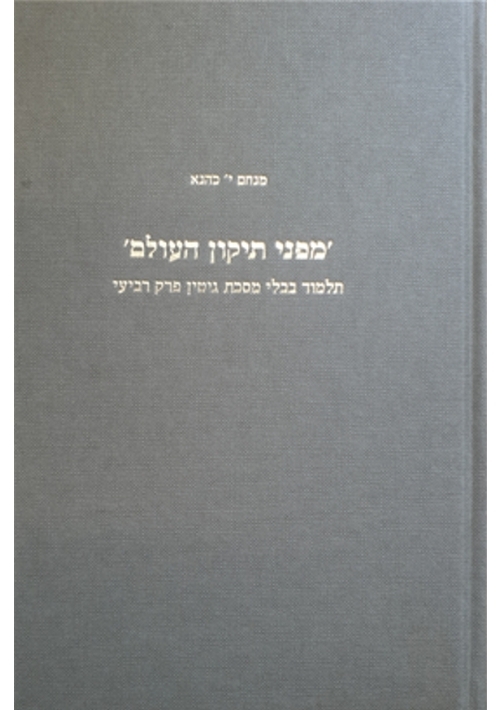 Mipney Tikkun Olam (Hebrew) Commentary
Talmud Bavli Masechet Gitin. Perek Revi'i
Author: Nachman Kahana
Price: $48.00
Special Price: $36.00
Format: Hard Cover
ISBN 13: 9789657008607
Number of Pages: 554
Year Published: 2020
Description:
The Babylonian Talmud is the Jewish composition of greatest scope, and its influence on Jewish life is decisive. Jewish sages have devoted more time and energy to its study and halakhic interpretation than to any other book, including the Bible, to the extent that talmud Torah, Torah study, is mainly perceived as the study of the Babylonian Talmud. Its academic study, in contrast, is still in its initial stages. Critical editions, with the text based on the best manuscripts and an exhaustive and thorough critical commentary, have been published of only a few of the thirty-seven tractates of the Babylonian Talmud. Central questions pertaining to the manner of the formulation of the Talmud, its redaction, and its transmission are still unresolved. This is different from the state of research of other Rabbinic works, the study of which has taken significant strides in recent decades.

Critical, balanced, and cautious interpretation of talmudic sugyot (discursive units) will likely illustrate the treasures to be revealed by a scholarly reading of the Babylonian Talmud: illuminating new facets of which traditional study is unaware; the consistent presentation of its meticulous literary fashioning, its contentual depth, and the creative force embodied in this corpus. All these find expression even in sugyot that seem tenuous and bothersome to the traditional student.

Tiqqun Olam (Repairing the World) seeks to advance the research of the Babylonian Talmud with an annotated edition of the fourth chapter of Tractate Gittin, which contains various regulations that were enacted for tiqqun olam. This chapter was chosen for the wide variety of its topics and the redactive methods employed, and for the benefit to be gained from their critical analysis. The widespread study of this chapter in high schools and yeshivot also influences its selection, in the hope it will aid both students and scholars in highlighting his difficulties and in exposing the overt and covert trends of the Amoraim and the redactors of the sugyot.

The first chapter of this book examines the meanings of the term tiqqun olam in the Mishnah and the Tosefta, along with the structure of the tannaitic units containing regulations for the repairing of the world in these two tannaitic works. The main body of the book contains a systematic discussion of these mishnayot and sugyot, using philological-historical methodology, alongside the literary analysis, which has not been sufficiently developed in talmudic research to now. The talmudic text is divided into forty-nine sugyot. For each the book offers a new text based on MS. Firkovich 187, a list of parallels, a selection of textual variants and discussion of their originality, and a commentary. The commentary includes a detailed explanation of the sugyot and an analysis of their strata. A unique attempt is made to glean from within the traces of the difficulties within the sugyot and the dissonance they exhibit the aims of the redactors, who frequently formulated new laws, while devoting sophisticated literary effort in order to mask these innovations, and to impart to the sugyah a harmonious composition.

In this book, much effort was invested to reveal the plain meaning of the Talmud, employing the tools of scholarly research - which, for various reasons, are not integrated into the widespread study of the Talmud today. The book undertakes to open a window to the academic world and its methodology, to enable Talmud students to come to know the world of Babylonian Talmud scholarship that is both demanding and profound, but also intriguing, while offering new insights.
You may also like: