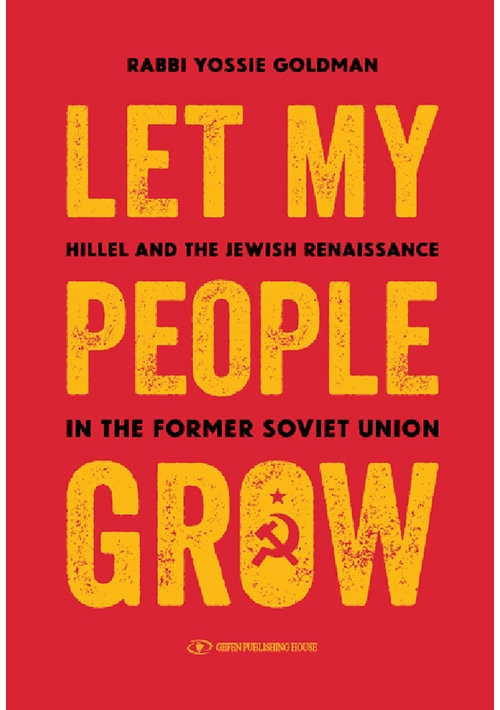 Price: $24.95
Format: Hard Cover
ISBN 13: 9789657023266
Catalog Number: 7023-26 / g7326
Number of Pages: 220
Description:
When the Soviet Union collapsed, much of its Jewish population emigrated. But those who remained were often disconnected from Judaism. It was into this vacuum that Hillel stepped in, gradually building a network of Hillel centers across the Former Soviet Union, serving tens of thousands of Jewish students - both those who retained a Jewish identity but more significantly those who had become alienated and estranged from their roots - and creating a Jewish future in the FSU.

Rabbi Yossie Goldman led Hillel's efforts to rebuild Jewish identity among university age students in the Former Soviet Union. In Let My People Grow, Goldman tells the story of Hillel in the FSU from its humble beginnings in Moscow, and its first steps and missteps in the chaos that followed the fall of communism through to nourishing an indigenous Jewish leadership that sustains the community to this day.

How does one celebrate Jewish holy days in a meaningful way that speaks to students whose experience with traditional Jewish ritual is limited at best?

How does one engage Jewish young people, who literally only yesterday had discovered that they are Jews?

How does one embrace them with love and respect for Jewish traditions, heritage and people, and how does one create the building blocks of community?

In a journey across time and across the Former Soviet Union with its myriad languages, cultures and Jewish communities, Goldman answers these questions and more, questions that he could not have known the answers to when he started out on that journey.

But as Goldman tells us: The best way to predict the future is to create it.