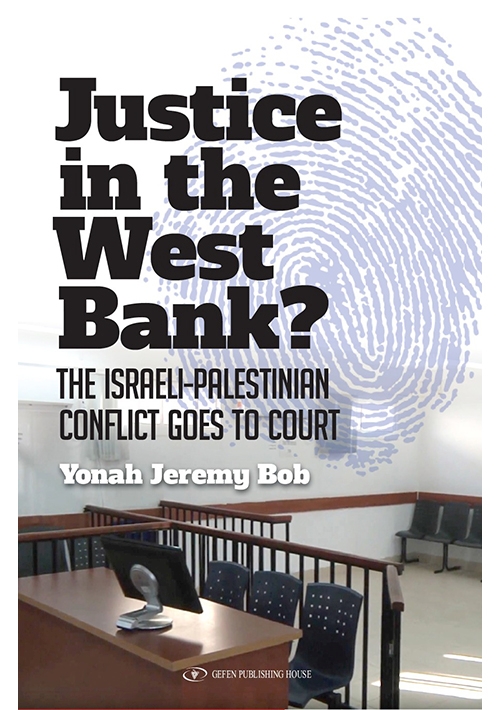 Justice in the West Bank?
The Israeli-Palestinian Conflict Goes to Court
Author: Yonah Jeremy Bob
Price: $19.95
Special Price: $18.00
Format: Paperback
ISBN 13: 9789657023167
Catalog Number: 7023-16 g7316
Number of Pages: 248
Year Published: 2019
Description:
Justice in the West Bank? A Black, White and Gray Zone is a book and documentary project and the first-ever insider look at the West Bank justice system. It is also a balanced, human story, which follows the key legal personalities of the West Bank courts and their interactions in the high-profile cases that have come to define the Israeli-Palestinian conflict. Top IDF officials signed off on special never-before-given access to the chief West Bank prosecutor Maurice Hirsch, a South African-born, England-raised Jew whose parents were arrested and forced to flee for fighting against the apartheid regime in the late 1980s.

Also weighing in, is the former chief justice Aharon Mishnayot who ushered in major reforms to expand Palestinian rights as well as several of the leading Jewish, Christian and Muslim attorneys who vigorously defend the Palestinians. Through this multi-lens perspective, we see up close and personal how Israels national security needs are weighed against her responsibilities as a democracy in the most complicated and notorious recent cases. We explore the fate of several dozen Palestinians who were convicted of murder, such as the rock throwing killer of American-Israeli Palmer, were sentenced to life in prison and then were released in the landmark Gilad Schalit prisoner exchange.

Some were subsequently rearrested after the notorious kidnapping and killing of three Jewish teenagers, including American-Israeli Fraenkel, by Hamas operatives. They were arrested for their alleged links to Hamas more than for any evidence of their involvement.

We see how Israel aims to reform its independent judiciary to better protect the rights of Palestinians, while the lawyers who defend Palestinians criticize the judiciary as illegal or unfair. We are reminded of whats at stake for Israel, as we walk through the gory details of several terrorist attacks and the plight of the judiciary to bring justice to the victims and their families without sacrificing Israels status as the only beacon of democracy, however imperfect, in the Middle East.

Makes for very interesting and colorful reading, which brings you closer to the complexities of the areas involved and how the fight against terrorism is conducted within the law and its constraints and limits. The book significantly helps to attain the understanding.
Elyakim Rubinstein former Israeli Supreme Court Deputy Chief Justice and Attorney General

Yonah Jeremy Bob vividly brings to life the drama of the Camp Ofer trials of Palestinian terror suspects, and provides readers with a rare perspective into the private lives and professional choices of the legal protagonists who [operate] there.
Yuval Shany senior official of the UN Human Rights Committee and the Israel Democracy Institute

Yonah is one of the worlds experts on Israeli military courts, a place he knows as a
lawyer and reporter. For anyone interested in understanding the legal aspects of the
Israeli-Palestinian conflict, this book is essential reading.
Yaakov Katz Editor-in-Chief, Jerusalem Post
In the limited landscape of writings on the Military Courts in the West Bank

Yonah Jeremy Bobs book is an exceptional addition. Bob successfully combines a serious
and detailed discussion of the issues with the ability to paint a very live picture of
people involved in the process, their background, fears, and dreams.
Col. (res.) Liron Libman former IDF Chief Prosecutor and head of the International Law Division