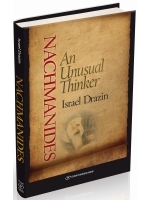 Price In Israel NIS 72
Nachmanides: An Unusual Thinker
Author: Israel Drazin
Price: $24.95
Special Price: $19.96
Format: Hard Cover
ISBN 10: 9652298875
ISBN 13: 9789652298874
Catalog Number: g887 / 887-4
Number of Pages: 200
Year Published: 2017
Description:
Nachmanides was and still is a highly respected scholar. Yet despite his brilliance he had ideas that many modern Jews are unable to accept. He was the first person who contended that the Bible, Targum Onkelos, and the other Aramaic translations of the Bible contained mystical teachings.

In this volume, Dr. Drazin reveals some unusual and generally unknown facts about the revered sage and demonstrates that his mystical notions and his stands on issues such as medicine, magic, astrology, divination, life after death, the land of Israel, women, angels, hell, demons, and even God are not the normative views of most modern Jews.

This fresh look at one of Judaisms most venerated sages asks and answers provocative questions on the nature of Nachmanides work and its role in Jewish thought.
You may also like: