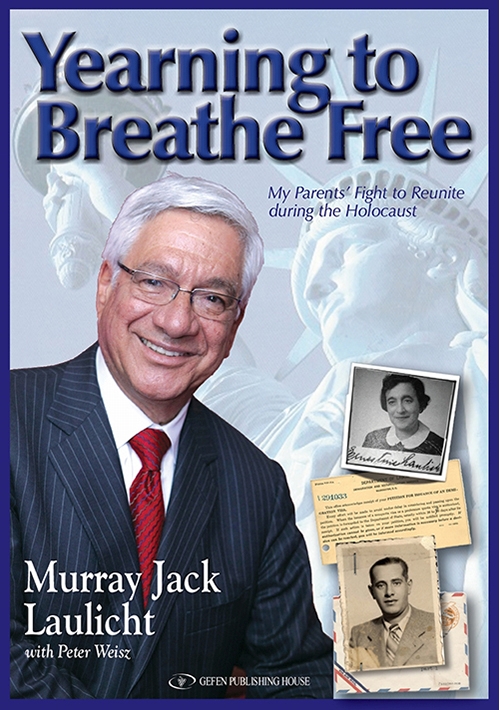 Also available on Amazon.
To order on Amazon click here.
My Parents Fight to Reunite during the Holocaust
Authors: Murray Jack Laulicht
Peter Weisz
Price: $29.95
Format: Hard Cover
ISBN 10: 9652298646
ISBN 13: 9789652298645
Catalog Number: 9789652298645
Number of Pages: 305
Year Published: 2015
Description:
On February 1, 1940, a thirtythree-year-old Jewish woman arrived alone in New York Harbor bearing, in her womb, the person who would eventually become me. Ernestyna Goldwasser had left behind her family, steeped in the rich Jewish culture of
Krakow, to seek sanctuary from the marauding Germans, who had viciously invaded Poland the previous September.

As the child of a father who held US citizenship, Ernestyna enjoyed a special status that became priceless when the war broke out. She, too, was deemed a US citizen and thereby eligible to
emigrate out of Poland. Unfortunately, Ernestynas husband  my father, Chaskel Goldwasser  enjoyed no such status. As his wife, pregnant with their
first child, embarked on her journey, Chaskel was forced to remain behind, trapped in the inferno that was soon to engulf and incinerate one third of the worlds Jewish population.

My mother entered the US through the famed golden door mentioned in the final words of the Emma Lazarus poem that graces the Statue of Liberty. Unfortunately, because of the anti-Semitic policies of the US State Department, that door
remained shut tight to my father.

During my mothers valiant struggle to reunite with my father, they were able to maintain an intimate and highly emotional correspondence. Many of their letters have been preserved and are
presented in this volume as a first-person
account of their desperate struggle to find
the key that would unlock my fathers imprisonment...before it was too late.
You may also like: