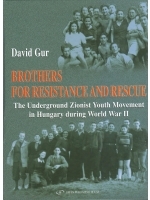 Description:
This book contains one of the most inspiring pages in the history of Hungarian Jewry- the recruitment and organization of the Zionist Youth Movement in the year 1944, during the Nazi occupation. The youth movements mounted resistance against the Nazi conquerors and their Hungarian helpers, and were able to rescue many Jewish youth from the claws of extermination, as well as tens of thousands of Jews from Budapest and many, many more from among the prisoners and from forced labor camps throughout Hungary.

This anthology presents 420 personalities from among the Zionist underground activists in Hungary in the year 1944, with their pictures and brief biographies. The material in this book was assembled sixty years after the events, and therefore record retrieval was a formidable challenge, yet we were able to locate and find details of approximately a third of the resistance activists. This commendable compilation deserves the appreciation and pride of every Jew. In particular it is an exemplary model for the young generation.

The anthology was published in Hebrew (2004) by the Israeli nonprofit Society for the Research of the History of the Zionist Youth Movement in Hungary and in English (2007) in conjunction with Gefen Publishing House, Ltd.