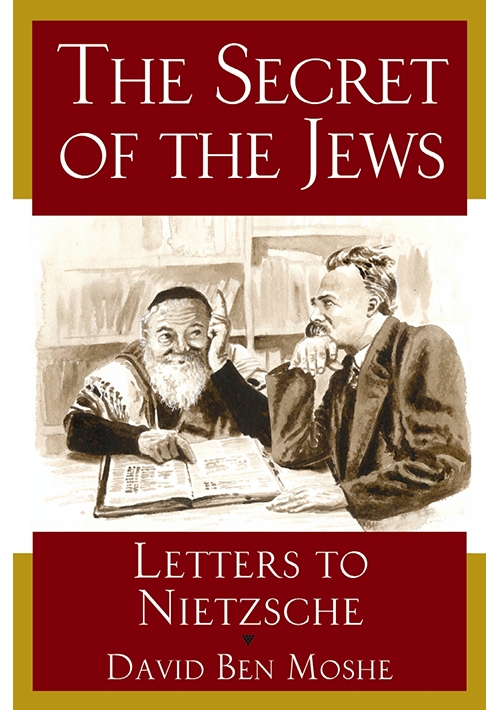 The Secret of the Jews

In this seminal book, David Ben Moshe goes beyond generalities to describe how the Jews have re-established a Jewish State in an area coveted by every major power throughout history.

Friedrich Nietzsche is as often misunderstood as the Jews. Ben Moshe highlights Nietzsches admiration for the Jews of the Bible, and looks into the remarkable similarity between many of Nietzsche's writings and Jewish sacred texts.

Reviews:
After getting into this book, I showed it to a couple people. Three people, three reactions (a little under par- youd expect four opinions from three Jews). These letters were a delight for me, an escorted stroll through the back alleys of history. It illuminated little-known relationships (and almost relationships) between important figures in different worlds that arent often studied in the same context (e.g., secular philosophy or psychology and Torah law).
Someone else I showed it to asked, Who cares? Indeed, it is a valid question for some to ask of such an esoteric topic as this, but ultimately, this is an important book in its depiction of the dawn of the modern (Modern?) Jewish identity and different attitudes towards historiography.
A relative I showed it to, who is a longtime scholar of Nietzsche, dismissed the book. While he didnt dispute the distortions that have been made of Nietzsches views, he felt that the author carries his fantasy of letters to the philosopher too far, and imbues in him ideas that conflict with some of Nietzsches doctrines. I cant speak to this issue, as I am a Nietzsche newbie, but in the end, I can look past this, as the audience of these letters is not the long-gone philosopher. This correspondence is a useful, if occasionally awkward, device to engage the reader
This book will not have a wide audience, but I suspect it will have a deep one.
David Statman, posting to LibraryThing.com and Amazon.com
You may also like: