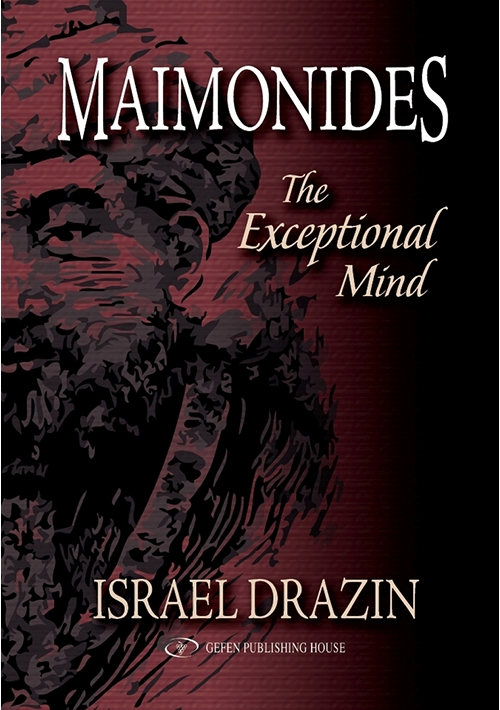 Price: $29.95
Special Price: $24.45
Format: Hard Cover
ISBN 10: 9652294241
ISBN 13: 978-9652294241
Catalog Number: 424-1
Number of Pages: 368
Year Published: 2008
Description:
Maimonides:The Exceptional Mind is an examination of the remarkable penetrating mind of Moses Maimonides and to his rational eye-opening thoughts. It includes ideas that are not incorporated in the usual books about this great philosopher because they are so different from the traditional thinking of the vast majority of people. It contrasts the notions of other Jewish thinkers, somewhat rational and others not rational at all.


THE BOOK ADDRESSES PROVOCATIVE QUESTIONS SUCH AS:

- Who was Maimonides and why do virtually all Jews consider him a genius and unique?

- Are we obligated to believe all the thirteen principles that Maimonides listed?

- Are Jews required to believe anything?
- What is the ultimate goal that humans should strive to achieve?

- Why are Jews obliged to observe Jewish practices?

- Is it possible that great and respected Bible commentators like Rashi had non-rational notions in their commentaries?

- What is wrong with the concept of the chosen people?

- What is Jewish mysticism and how and when did it develop?

The reader will be surprised, if not shocked, to learn that a host of beliefs that are prevalent among the Jewish masses have no rational basis. This does not suggest that Judaism itself is irrational and absurd. Just the opposite. But many Jews have opted to believe the unreasonable and illogical conventional ideas  what Maimonides would label non-Jewish Sabian notions  because they have not been acquainted with Maimonides correct rational alternatives and taken the time to reflect upon it.

Reviews:
Dr. Israel Drazin, accomplished Targum scholar, has turned his writing skills to Maimonides, whose rationalistic approach (Maimonides: The Exceptional Mind) fascinates the author. Despite the overwhelming acceptance of the Rambams authority, Drazin demonstrates the existence of a surprising gap between the Masters ideas, and contemporary traditional thought and observance. Rambam describes God as withdrawing from His world after creation, for intervention would compromise the philosophic concept of His perfection. But traditional Jews do not cease to pray for Gods intervention. Rambams halakha does not recognize demonic forces, but those sections he eliminated from the liturgy for this reason (e.g. in Kiddush Levana) remain in the most traditional prayer books.
Parts two and three of this book are devoted to exposing non-rational parts of contemporary Jewish practice (devils, demons, mysticism) despite their rejection by Maimonides. Following holiday sequence, Drazins revelations are fascinating eye-openers: Demons and Sympathetic Magic in the Passover Seder will cause many to begin reading this beautifully crafted volume from Chapter 31!
The conflict between Rambams rationalism and popular religion is spelled out over a wide range, including passing over Rambams Mishneh Torah (why did Judaism reject it) in favor of other law codes.
Drazins work on Maimonides is marked by disarming candor, uncompromising intellectual curiosity, penetrating original analysis, and love of Maimonides, making his thought the prism for investigating all things Jewish (Rashi was convinced that God is corporal, that He has a body, including hands, feet, and head). The book is written with skill and extreme clarity, uncovering true deep meanings in the Rambams words. Each chapter spells out questions, and summarized the discussion at the end. The physical production of the volume sets new standards of attractiveness.
Israel Drazin presents us with captivating insights into Jewish intellectual history, thought, and practice, built around Maimonides, the Jewish philosopher king, and pivotal figure for all things Jewish for almost a thousand years.
Drazin tells it like it is. The book cannot be put down!

Israel Drazin has added his prolific pen to the ongoing quest for the real Maimonides. Is it the Rambam of his Code or of his Guide? Rabbi Drazin comes down squarely on the side of the rational approach of the Guide. He makes his case in an extremely well written and understandable volume entitled Maimonides: The Exceptional Mind.
It is indeed a worthwhile challenge for an individual such as myself who was raised on the Code of Brisk and Volozhin. Dr. Drazins work is a valuable new link to the endless chain of Maimonidean scholarship, which began after the Rambam thought his writings would seal the Oral Torah.

Israel Drazin provides us with a marvelous transition from his last volume, A Rational Approach to Judaism in his latest work, Maimonides: The Exceptional Mind, by describing, in clear and lucid language, the contribution of this greatest of rationalists to Jewish thought and understanding.
This is not a book for the intellectually faint of heart. It is unconventional, extraordinarily thought provoking, and has the potentiality to bring inquiring Jews back to the orbit of Jewish life. To learn about this now venerated sage from the pen of one who has devoted his life to searching for truth, is to embark on a new and exciting journey from which there can be no return to an unexamined Judaism. We are grateful to Dr. Drazin for prying open our unexceptional minds.

Israel Drazins Maimonides: The Exceptional Mind is a passionate and provocative polemic against ignorance and blind faith in Judaism. Jews must think for themselves. Sadly, many Jews do not adhere to this principle of Judaism. For Drazin, Maimonides is the champion of enlightened and rational commitment to a life of Torah free from superstition and mysticism.

Dr. Israel Drazin succeeds in presenting Maimonides philosophy in a manner that the average reader can comprehend. The ideas presented are clearly stated so as to induce the reader to probe his own thinking. The author and the reader are thus engaged in a profound and meaningful conversation.
The book is a valuable and original contribution to the vast literature on Maimonides.