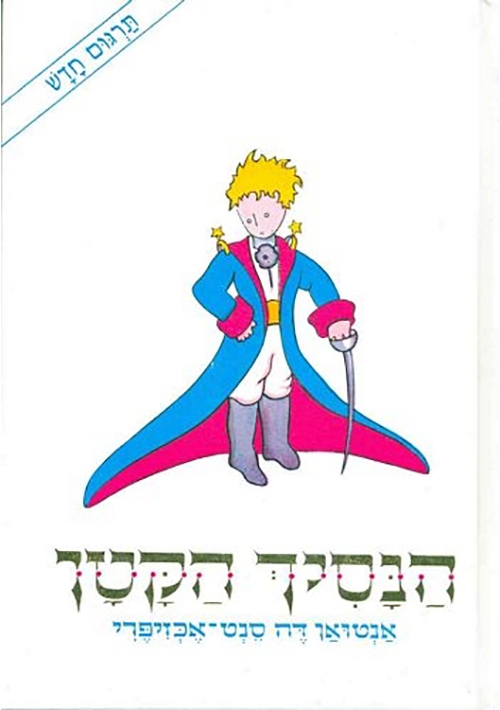 Also available on Amazon.
To order on Amazon click here.
Hanashich Hakatan
Authors: Antoine de Saint-Exupery
Ilana Hemerman (translator to Hebrew)
Price: $30.00
Special Price: $24.00
Format: Hard Cover
ISBN 10: 9651308834
ISBN 13: 9789651308833
Catalog Number: D-883-2 / d883
Description:
This is a second Hebrew translation of The Little Prince. One has to compare this translation with with the former one to feel the difference. Aryeh Lerner's translation became a sort of a classic (it appeared in 1952 and has been re-edited many times). Ilana Hammerman's new translation appeared for the first time in 1993. There is 41 years gap between those two versions filled of course by many editions of Lerner's translation. The language changed, some words were replaced by others with the time passing. Besides, Lerner as a Ukraine born polyglot (since 1937 in Eretz Israel) left in his translation a trace of the original imitating the French syntax in many places. Israeli born, Ilana Hammerman's translation looks for me more modern, one reads the sentences with the feeling to stay in touch with modern contemporary Hebrew, still having a background of a tale. As a linguist (not a Hebrew speaker) interested in Semitic languages I would of course recommend both translations. For the people with a moderate knowledge of Hebrew the new edition has one advantage: the text is fully vocalized (even the chapters' numbers are given with words not with numerals). The book is beautiful: golden and blue Hebrew letter on the front cover, hard cover, the pictures of the author clear and properly placed, the print is clear, without any inferiority in the shape, and the letters are easy recognizable. I still keep Lerner's translation (I have unvocalized electronic version, so I cannot tell anything about other editions), but I prefer this translation.
Reviews: