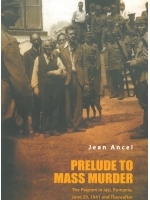 Also available on Amazon.
To order on Amazon click here.
The Pogrom in Iisi, Romaia, June 28 and Thereafter
Author: Jean Ancel
Price: $70.00
Special Price: $40.00
ISBN 10: 9653084453
ISBN 13: 9789653084452
Catalog Number: 9789653084452
Number of Pages: 680
Year Published: 2014
Description:
June 29, 1941. The beginning of the murder of about 15,000 Jews in Iaşi, about one-third of the citys Jews, in riots instigated by the fascist Romanian regime of Ion Antonescu. This was but a prelude to the genocide of the Jews of Romania. The thousands of Jews who remained alive in the city were crowded into two death trains and deported, with most dying of hunger and thirst. This pogrom was hushed up for about 50 years, until the late Prof. Jean Ancel tracked down the documents, despite being shadowed by Romanian secret police, and despite the whitewashing and concealment by all of Romanias postwar regimes. As a one-year-old, Ancel survived the riots, while most of the men in his extended family were murdered. A brilliant scholar, his life mission was to reconstruct the history of the crimes perpetrated against the Jews of Romania during World War II, collect materials on the slaughter at Iaşi, and bring the story of this shocking event of human suffering to light. The current volume is the fruit of over two decades of research and writing. This English edition is based on rich documentation that made it possible for the late Dr. Jean Ancel to recreate the events from the Jewish viewpoint, which was sorely lacking in studies of the Holocaust in Romania. The book is an in-depth expansion with new materials of the chapter on Iaşi in Dr. Ancels book Comprehensive History of the Holocaust: The Holocaust in Romania.