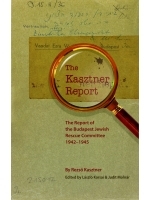 Also available on Amazon.
To order on Amazon click here.
The Report of the Budapest Jewish Rescue Committee 19421945
Authors: Laszlo Karsai (Editor)
Rezso Kasztner
Judit Molnar (Editor)
Price: $58.00
Special Price: $49.00
ISBN 10: 9653084437
ISBN 13: 9789653084438
Catalog Number: 9789653084438
Number of Pages: 394
Year Published: 2013
Description:
Rezső Kasztner was one of the most controversial figures to emerge from war torn Europe and the ashes of the Shoah. A leader of the Budapest Jewish Rescue Committee, during the last year of the war in Europe, the Zionist Kasztner became the point man for negotiations with the SS to save Hungarian Jewry. In Israel in the 1950s he was vilified by some for having sold out his Jewish brethren and was saddled with the blame for the suffering and murder of the lions share of Hungarian Jewry. Kasztner was assassinated in Tel Aviv following a spectacular post-war libel trial in which he had tried to defend his good name. Today scholarship sees him in a different light and his Report, now published in English and with scholarly footnotes for the first time, is one of the main reasons why.