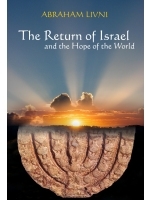 The Return of Israel

Also available on Amazon.
To order on Amazon click here.
and the hope of the world
Author: Abraham Livni
Price: $29.95
Special Price: $24.50
Format: Hard Cover
ISBN 10: 9659188617
ISBN 13: 9789659188611
Catalog Number: 9789659188611
Number of Pages: 416
Year Published: 2013
Description:
The Holocaust, 1944; creation of the State of Israel, 1948 a paradoxical and overwhelming connection! On one side, the brutal defeat of a two thousand year old civilization, whose complete moral structures collapsed. On the other side, the resurrection of a people, set apart for more than 3,000 years in order to introduce to humanity the eternal message of the prophets. But between the anxiety of a damaged civilization and the hope of a young nation returning to the supernatural heritage of its roots, the choice can seem uncertain still.

Abraham Livni draws from the traditional sources of Jewish thought and analyzes the reasons for the failure of a civilization who had attempted to strip the ancient people of Israel of their Land, of their Bible and of their identity. He allows us to discover in the history of the Jewish people the backbone of the complete human adventure, witnessing History, prototype, carrier of the only hope of salvation for the modern world.

Abraham Livni was 20 years old when he discovered the horror of the Holocaust. He then searched to solve the mystery of anti-Semitic hate. A long intellectual and spiritual quest drove him to Judaism and to settle in Jerusalem in the 1960s.

Published in 1984 and re-edited several times since, the Return of Israel and The Hope of the World has overwhelmed thousands of readers, Jews and non-Jews alike in the Francophone world. At a time where the State of Israel arouses powerful controversies, it remains a burning issue. The book was translated into Hebrew and is creating a real stir in Israel; it has also been translated into Spanish and Russian.

This book has a definite
importance and is worthy of translation into English.
Elie Wiesel

I was deeply struck by the quality of this work, and I can only express this in the following way: This is the book that we have been waiting for and not just for the Jew in exile, but also for the Israeli.
Rav Shlomo Aviner


Abraham Livni will be known in the time to come as one of the most remarkable Jewish thinkers of Israel. In effect, his word, free from all complacency, is that of one of the rare contemporary masters aware, through direct experience, of the intellectual and spiritual problem of the themes that he addresses on this subject.
Rav Yehuda Ashkenazi