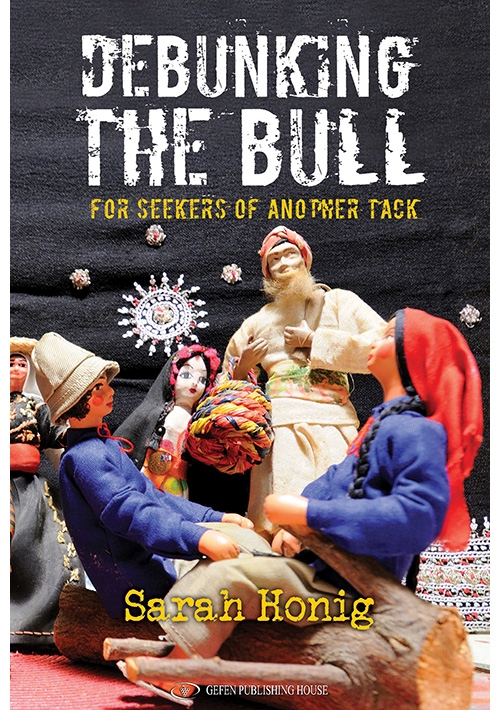 a polemicist without equal in Israel - Brett Stephens
Debunking The Bull

Price: $19.95
Format: Paperback
ISBN 10: 9652296074
ISBN 13: 9789652296078
Catalog Number: 9789652296078
Year Published: 2013
Description:
This is an anthology of Another Tack columns which originally saw light in recent years on the weekend pages of the Jerusalem Post, where they have been a regular weekly feature since 1999. These columns have gained an extraordinarily popular following, with many readers turning to Another Tack before perusing the rest of the paper. Their basic concept is to truly follow another tack and approach current events from novel directions and uncommon points of view. Thereby Another Tack often flies hard in the face of the prevailing bon ton and debunks conventional wisdom, the diktats of opinion-molders and trendy groupthink.
This is primarily achieved by contextualization, by placing controversies and issues in their historical contexts and refreshing the readers memories, encouraging them to consider what the tendentious media often prefers they sideline or forget outright. Another Tacks readers are never spoon fed; they are challenged. The contextual backdrop may include historical references, cultural, political, and even meanderings into the realms of the arts, folklore, religion, showbiz, humor, philosophy, psychology and much more. All sorts of unexpected allusions and anecdotes may crop up in Another Tack. The final product is laced with wit and irony, kowtowing to no one but invariably expressing deep love for the Jewish people.

Reviews:
Sarah Honig, who has been a columnist for the Jerusalem Post for many years, makes three points in this book. The first is that the Arab world is not interested in a two state solution, and in living in peace with Israel. Its one true goal is to wipe Israel off the face of the earth. That was its goal in 1929, in 1948, and in l967, and that is its goal today. If it ever accepts a two state solution, it will only be as a station along the way to final destruction of Israel. The second is that the Western world is naïve if it believes otherwise. Obama does not care whether Israel survives or not. Neither does the United Nations. The West pressures Israel to compromise, not caring about the long range consequences to Israel's safety. The third is that the Israeli governmentsnot only the left, but even the rightare not interested in preserving Israel but only in fawning upon the United States and winning the affection of the West. They are, in her words, 'suck-ups', more concerned with flattering America than in standing up for Israel's right to exist. If you already agree with these three principles, you don't have to read this book, which repeats them over and over again for nearly two hundred and fifty pages. And if you do not already agree with these three principles, you will probably not be persuaded by reading this book, because the repetition of these three arguments over and over again will probably turn you off rather than convince you. What struck me as I read this strident book is what does it do to the mind of a person to believe these principles: that there can never be peace, that the world doesn't care about your survival, and that your own government is in self-destructive delusion? Ms. Honig may be right; she may be wrong, I don't claim to know than she does about political affairs. But I worry about a mentality that sees the world as forever against you, and that sees no alternative but never ending resistance. What does it do to a community to live with such suspicion? What does it do to its youth to live with such cynicism? I must admit that there is some considerable evidence on her side. Oslo failed. Gaza failed. The withdrawal from Lebanon failed. The forces that have replaced Mubarak in Egypt are not more peace loving or friendly to Israel and the West than he was. The likelihood seems to be that those who will replace Assad in Syria will not be any more liberal or any more pro-Western or pro-Israel than he was. And yet, I am not sure that a community can live a healthy life with no belief in a better future, and no expectation that peace is ever possible. I hope Sarah Honig is wrong in this diatribe, for Israel's sake. I know there is a terrible risk in being naïve, as she makes so clear so many times in this book, but I fear that there is a risk in being too unwilling to hope too. Perhaps someone can make the case for a worldview somewhere in between naiveté and the anger of this book. I hope so. Rabbi Jack Riemer is a regular reviewer for many journals in America, Europe and Israel. He is the co editor of So That Your Values Live On: A Treasury of Ethical Wills, and the editor of The World of the High Holy Days.
Rabbi Jack Riemer


This superb collection of articles from the incomparable Sarah Honig is called 'Debunking the Bull,' and what a delightful debunking it is. But its more than that. It is a work of passion and erudition, of insight and observation, of clarity and punch. You will pick it up and find yourself reading just one more column, and then another, and then another. And when youve read it cover to cover, probably in one long sitting, and given it to your spouse to read, and purchased additional copies for your children and your relativesthen you will realize that you have been in the hands of a polemicist without equal in Israel or the world.
Bret Stephens,
Foreign Affairs Columnist, The Wall Street Journal, former Editor in Chief of the Jerusalem Post
You may also like: