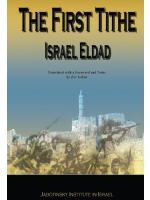 For the first time, English speaking historians and political scientists will have access to one of the major works by one of the founding fathers of Israel  Dr. Israel Eldad, the ideologue of the Lehi underground, according to Yosi Ahimeir, director of the Jabotinsky Institute.

Eldad was one of the three-man Central Command of Lehi (also known as the Stern Group). He escaped from the Nazis with Menachem Begin and directed the Lehi with Yitzhak Shamir and Natan Yellin-Mor. He negotiated with Labor movement leaders such as Golda Meir and with the commanders of the Hagana. His memoirs shed light on the relations between the Irgun, Lehi and Hagana as well as on the personal lives and interactions of future prime ministers and national leaders. The stories and analysis of The First Tithe have never before appeared in English.

The First Tithe has gone through some five editions in the original Hebrew. The English translation is by Zev Golan, who has appended to it a short biography of Eldad, some personal reminiscences of Eldad and explanatory notes to the text. Golan has previously published God, Man and Nietzsche, which includes an examination of Eldads philosophy of history, and Free Jerusalem, a history of the Brit Habirionim, Irgun and Lehi.

Golan notes that after laying the ideological basis for the fighting underground of the 1940s, Eldad went on to become the doyen of the Israeli right and one of Israels leading thinkers. In addition to accounts of his secret discussions with Abraham Stern, Begin, Shamir and Golda, The First Tithe explores the moral issues involved in terrorism, and the political motivations and justifications for the actions of the Jewish undergrounds. Yet, since Eldad was throughout the 1940s on the run, in prison or escaping from prison, The First Tithe is not only a book for historians and analysts, it is an exciting account of the dangerous times that led to the establishment of Israel, says Golan.
You may also like: