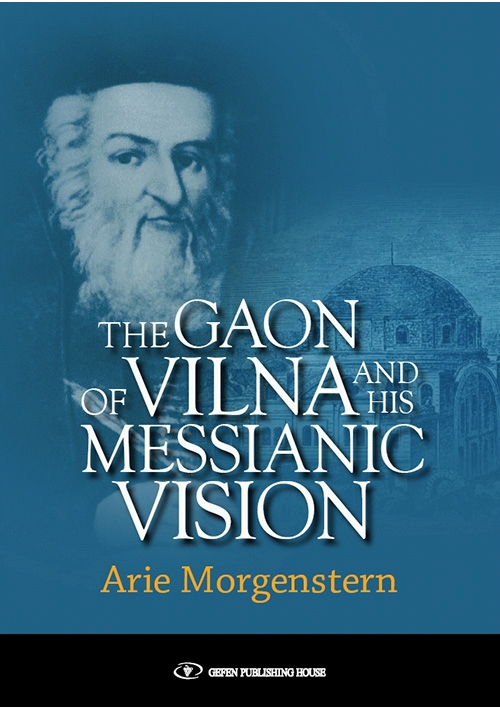 The Villna Gaon came to Israel to bring the redemption!
The Gaon of Vilna and His Messianic Vision

Also available on Amazon.
To order on Amazon click here.
Author: Arie Morgenstern
Price: $29.95
Special Price: $29.00
Format: Hard Cover
ISBN 10: 9652298190
ISBN 13: 9789652295668
Catalog Number: g566 566-8
Number of Pages: 426
Year Published: 2012
Description:
In 1990 a document was discovered in Poland, according to which the Gaon of Vilna (1720 1797) stopped in Amsterdam on his way to Erez Israel. Research based on this astonishing find, detailed in this book, brought about a chain of dramatic discoveries that fundamentally altered our knowledge of the historic figure of the Gaon of Vilna. One such discovery reveals that the journey to Erez Israel transpired in the year 1778, three years prior to 1781 the year set as the end time by the kabbalists of that generation, including the Gaon of Vilna himself. This book demonstrates that the Gaon of Vilna traveled to Erez Israel in order to compose a new Shulhan arukh, a final halakhic code that would bring an end to halakhic disputes within the Jewish people. In this way he hoped to ensure the Messiah s arrival in the year 1781. Mysteriously, the Gaon of Vilna abandoned his dream, reporting that Heaven had prevented him. By following in the Gaon s footsteps, The Gaon of Vilna and His Messianic Vision uncovers the cause of his aborted journey and the revolutionary approach to redemption that the Gaon subsequently developed.

Synopsis for The Gaon of Vilna and His Messianic Vision by Dr. Arie Morgenstern
The main discovery of this book is that despite the grave disillusionment and trauma that the Sabbatean crisis (1666) had inflicted, a new awakening for messianic redemption ensued in the eighteenth century.

Some kabbalists continued to insist vehemently that redemption was imminent and that one needed only to find new ways to assure its fulfillment through: mystical kavvanot, ascents of the soul, and cleavage to God.

But others declared that redemption can be attained only through mystical groups that would achieve fraternity and unity in Erez Israel, and exert a theurgic influence.

One of the most influential figures in this movement was Rabbi Immanuel Hai Ricchi (16881743). Ricchi performed various end-reckonings and geared them to a forty-one-year period that approximated his own timefrom 1740 to 1781.

He was not alone in this pursuit. Kabbalist like Rabbi Hayyim ben Attar , Moses Hayyim Luzzatto , kabbalists from the Kloyz of Brody, and hundreds of Hassidim in 1777, ascent to Eretz Israel out of messianic motives. We also discovered that the Gaon of Vilna was on his way in the year 1778, and even the quest for the Ten Tribes, which, according to tradition, would be discovered and returned at the End of Days, was also a part of that movement.

This book, inspired by newly discovered archive findings, sheds new light on entire eighteenth-century Jewish history, and especially on the most complex, historically unique persona of the Gaon of Vilna (1720-1797), who perceived himself as having a messianic mission: to reveal the Torah as it had been handed down to Moses at Sinai and writing the final code that would lead directly to the imminent redemption of the Jewish people.
Reviews:
A very important revised and expanded translation of a book by Arye Morgenstern on the Vilna Gaon has just appeared in English and it is required reading for any serious discussion of the Gaon and his world. This is The Gaon of Vilna and his Messianic Vision published by Gefen Publishing House (Jerusalem and New York). It is a very reasonable $29.95 for a book of 450 pages. The book is full of references to documents, many of which were discovered by the author, It surveys in depth Jewish mystical trends and settlement in the Holy Land, the early Hasidic movement and its opponents as well as the life of the Gaon. Thus the book is also very important for any discussion of early Hasidism and the conflict between Hasidim and Mitnagdim. Morgenstern presents a very convincing argument for the Gaon's active messianic posture and concludes that the immigration of the Gaon's disciples to the Holy
Land was a turning point in Jewish History. Even those who will disagree will learn much from the
book.
Shaul Stampfer / Hebrew University